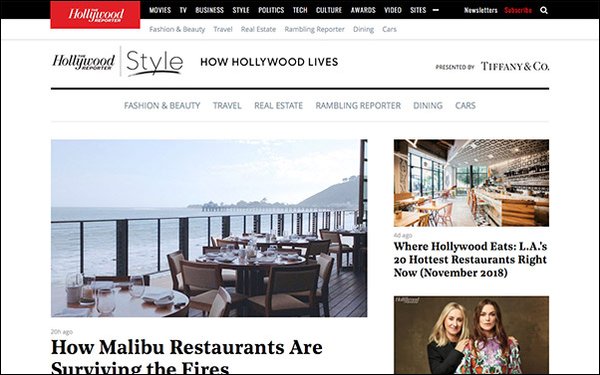 Style and fashion news director Booth Moore will oversee a weekly THR Style newsletter, with a podcast expected to launch early next year.

“Our readers obsess over cars and restaurants as much as they do their next films, so I couldn’t be more excited to deliver these stories with Booth’s definitive voice at the helm,” stated Matthew Belloni, editorial director, The Hollywood Reporter.

With the tagline “How Hollywood Lives,” Hollywood Reporter Style will build on the publisher’s access to talent, fashion influencers, wardrobe designers and studio executives.

In September, THR Style debuted “Hollywood Style Clinic With Andrew Weitz,” a video series that takes viewers behind the scenes as Weitz dresses executives and stars for major events.

Tiffany & Co. is promoting its Atlas 24mm collection on The Hollywood Reporter site.