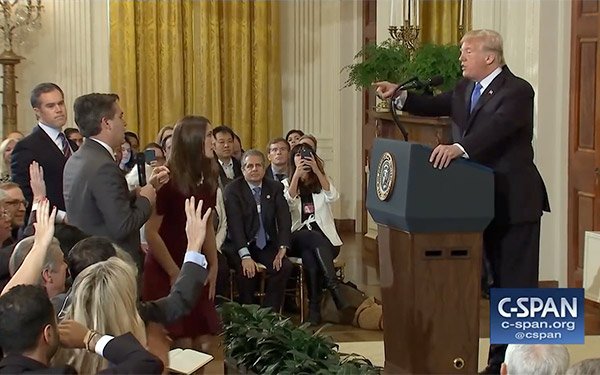 The revocation marks “an unabashed attempt to censor the press and exclude reporters from the White House who challenge and dispute the President’s point of view,” CNN and Acosta allege in a complaint filed Tuesday morning in D.C. District Court. The legal team representing CNN includes Ted Olson, who served as U.S. Solicitor General under President George W. Bush.

CNN and Acosta claim Trump violated the First Amendment by engaging in viewpoint-discrimination, and the Fifth Amendment by revoking Acosta's credentials without affording him due process rights -- including the right to prior notice, an explanation of the decision, or the opportunity to defend himself.

“There can be no question that the revocation of Acosta’s credentials is a content- and viewpoint-based punishment imposed on him because the President and his administration do not like CNN or Acosta’s reporting,” CNN argues in a motion for a temporary restraining order.

The dispute centers on the Trump administration's decision to revoke Acosta's “hard pass” -- which allowed him to enter the White House and press offices. Trump's move came after a November 7 press conference in which Acosta questioned the president about his prior statements characterizing a “caravan” of migrants traveling north from Central America as an “invasion.”

Acosta attempted to follow up, at which point a female staffer tried to take the microphone from his hand. Acosta held on to the microphone and started to pose another question.

After the press conference, press secretary Sarah Sanders posted a video that, in her words, appeared to show Acosta “placing his hands” on the staffer who had tried to take away the microphone. She later justified the White House's decision to revoke Acosta's press pass based on the “inappropriate behavior” supposedly shown in the video clip.

But that clip had been distorted to make Acosta's actions seem violent when they were not: The un-doctored clip -- accessible on C-SPAN -- shows Acosta trying to hold onto the microphone as the staffer tried to physically grab it away.

CNN and Acosta allege the real reason for the revocation was the substance of their reporting -- which Trump has frequently criticized.

“The manipulated video undergirding the administration’s revocation of Acosta’s credentials shows that its justification was pretextual and not in good faith,” they argue.

CNN isn't the only one to accuse the current White House of violating critics' free speech rights.

Trump also faces a suit filed last month by PEN America, which alleges he has retaliated against Amazon, CNN, NBC and individual journalists, due to their coverage of him. PEN America notes in its complaint that the administration banned CNN reporter Kaitlan Collins from a press conference this summer, because she had asked questions the White House thought “inappropriate.”

Earlier this year, a federal judge in Manhattan ruled that Trump violated the First Amendment rights of online critics by blocking them on Twitter. The White House is appealing that decision to the 2nd Circuit Court of Appeals.