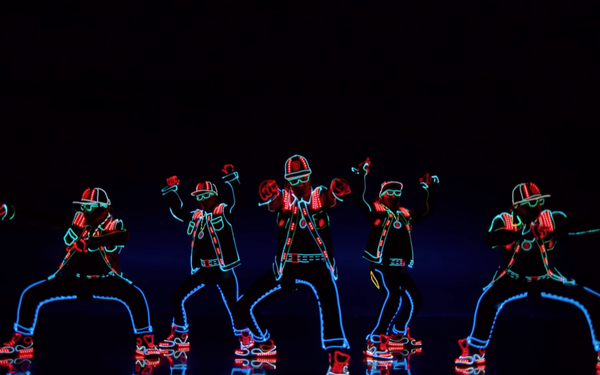 Walmart’s hot streak shows no sign of slowing. Its third-quarter sales and earnings blew past Wall Street expectations, and a new ranking from eMarketer says it’s set to topple Apple from its position as the third-largest e-tailer in the U.S., second only to Amazon and eBay.

Operating income climbed 5.9% to $5 billion, on a constant currency basis, up from $4.8 billion in the year-ago period. And it raised its financial forecast for the full year, and says it now expects a comparable-store sales gain of at least 3%.

Executives for the company say the store gains came from both an increase in traffic, as well as a jump in typical basket size.

“We’re encouraged by the momentum in our business and excited to be in a strong position to invest for the future as prior investments pay back,” says Doug McMillon, president and CEO, in a conference call to discuss the financial report.

He was especially bullish about the company’s progress in groceries, with pickup locations in nearly 2,100 stores, and 700 pickup towers set to be in place by the end of the fiscal year. “Grocery pickup has consistently delivered one of the highest Net Promotor Scores we’ve ever had, and that continued throughout the aggressive rollout in the third quarter,” he says.

Walmart also turned in another strong performance in e-commerce, with sales up 43%. “We’re primarily focused on the fundamentals of the business, but we’re also playing offense,” McMillon says, with innovations stemming from Store No. 8, its tech incubator.

“We’re expanding same-day delivery options through omnichannel capabilities and with Jet.com, and we’re adding more digitally native brands to the portfolio,” he says, such as new partnerships with Ellen DeGeneres, Advance Auto Parts and its purchase of specialty retailer Bare Necessities.

The eMarketer report says that by the end of the year, it expects Walmart, including Sam’s Club and Jet.com, to capture 4% of all online U.S. retail purchases, at $20.91 billion. (In July, it had estimated that share at 3.7%.)

By comparison, eMarketer estimates first-place Amazon will rake in $252.10 billion, a 29% jump from last year, putting its share of the U.S. e-commerce market at 48%.

McMillon also says the Bentonville, Ark.-based chain is feeling confident about the holidays. “We have integrated plans in place with our stores and online to continue taking market share. We’ve added new tools for customers and associates to improve speed and efficiency.”

The retailer is already running ads promoting its Black Friday deals. And while it’s got an historical edge for Thanksgiving Day, an analysis just released by intelligence firm Cuebiq shows its advantage wanes over the holiday weekend. While it got the majority of foot traffic on Thanksgiving last year, at 53%, that share fell to 40% on Black Friday, with Target, JC Penney, Kohl’s and Macy’s all gaining instead.