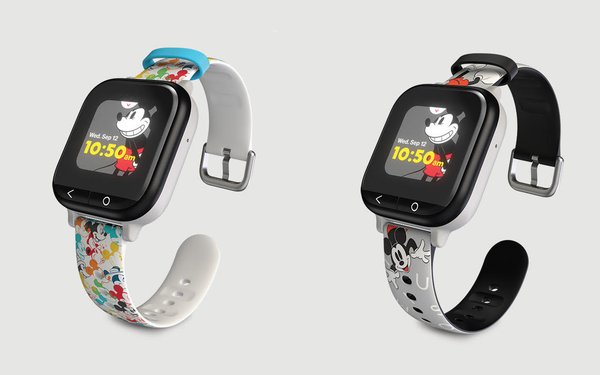 The iconic Mickey Mouse watch is getting another cousin of sorts.

Verizon is teaming with the Disney Co. to market a new Verizon GizmoWatch Mickey Mouse 90th Anniversary Edition smartwatch, aimed at kids -- but also targeted to parents who want a way to check up on what their little ones are doing.

The GizmoWatch Mickey Mouse edition will be the first 4G LTE kid’s smartwatch in the United States powered by Qualcomm, says Verizon, and it’s hitting a smartwatch market that is still relatively sparsely populated in this country.  Qualcomm is bullish on the kiddie crowd, and there’s a lot of room to grow.

According to London’s CCS Insights, only one million smartwatches for kids were sold in the U.S. last year, compared to 25 million in China, Verizon claims to be the U.S. market leader.

The GizmoWatch line is Verizon’s fourth iteration of a smartwatch for kids. The whole category doesn’t draw much marketing firepower. But with the overall smartwatch market still growing, Verizon thinks a Disney-branded smartwatch might get mom and dad’s attention.

Analysts speculate the market may not be robust because parents fret over privacy and security concerns for their little ones.

It’s a world filled with stranger danger, so Verizon and other kids’ smartwatch marketers emphasize all the protections, as in this online description of the Mickey Mouse watch's security features: “Automated alerts and a GPS locator provide independence while still keeping you in the know." Parents can also “set on-screen notifications and program up to 10 trusted contacts for 2-way voice calls and messaging.”

That way, even if a child gives his or her number to someone, that person must get parents' okay to start a phone relationship with the child.

There are also 20 functional prepared text messages for kids to send to a list of approved recipients. And the watch comes with an alert when children go outside its GPS radius.

And there’s a to-do list function reminding kids of important things they have to do.

The Mickey Mouse SmartWatch adds some fun for kids, too.  There’s a “voice changer” that allows kids to sound like a robot or other characters (but none from the Magic Kingdom, apparently). There’s a fitness tracker and hopscotch tracker they can use with friends, and colorful bands that make it look kid-friendly.

Otherwise, it looks a like the smartwatch mom and dad have. That’s pretty cool.