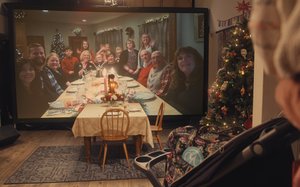 Teleflora, no stranger to weepy reality ads, is turning globetrotter this holiday season, using 4K projection technology to beam an Omaha Christmas to a military mom stationed in Japan.

The spot surprised Jennifer Bromm, an Army captain based in Tokyo, by recreating her childhood Christmases 6,000 miles away.

Her husband, a co-conspirator in the stealthy set-up, helped as a Teleflora crew transformed a studio into a replica of her home back in Nebraska. Family supplied many holiday artifacts, including her Christmas stocking and familiar china. And chefs prepared the clan’s traditional meal, right down to the turkey and cheesy potatoes.

While the company vetted dozens of potential candidates in casting for the spot, baby Bailey “pretty much sealed the deal,” says Amber Justis, executive creative director at Wonderful Agency. “Knowing that she wouldn’t be with extended family for her very first Christmas made it so poignant,” she tells Marketing Daily. “The power of closing the distance was really the fundamental part of the narrative.”

And while the floor-to-ceiling screens connecting the intercontinental dinner tables are what makes the surprise so powerful, “we were careful not to let the technology overwhelm the emotion,” she says.

The 90-second video is running online, including on YouTube and Facebook. And it’s the latest in Teleflora’s ongoing “Love Out Loud” campaign. “We’ve been telling iterations of this story for a while,” Justis says, “but feel like this hits the nail on the head, conveying the connection people feels when they get a bouquet from loved ones who are far away.”

Teleflora is owned by the Wonderful Company, which also owns Wonderful Pistachios, Wonderful Halos, and POM Wonderful, as well as several wine brands. Earlier this year, it announced that marketing investments in its brands had topped the $1 billion mark over the last decade. The privately owned company, based in Los Angeles, claims to be the fastest growing CPG brand in the U.S.