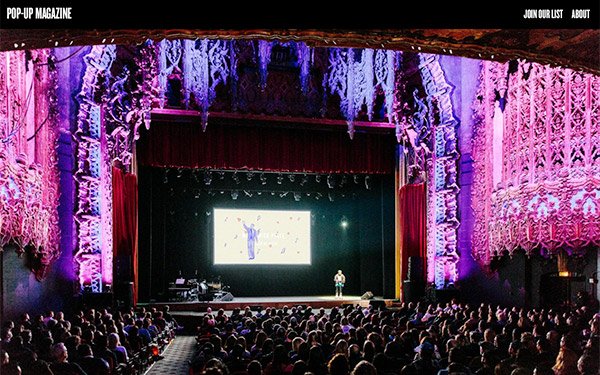 Emerson Collective has been a longtime supporter and investor in Pop-Up Magazine Productions. According to Recode, Emerson invested at least $10 million in the company last year.

“Both magazines have managed to create unique journalistic platforms that help foster empathy and better understanding in the world,” stated Powell Jobs, who is the widow of the late Apple Inc. founder, Steve Jobs.

The acquisition is a good fit, according to the companies, because of “shared values and ambitions.”

Emerson Collective is heavily involved in the media space. Last year, the firm acquired majority ownership of The Atlantic, and it invests in several independent and nonprofit journalism enterprises, such as Gimlet Media, Axios, ProPublica and Mother Jones, among others.

Pop-Up Magazine is known for its un-recorded, live journalism shows. Storytellers are brought on stage from film, print, audio and photography to share tales with the audience on different topics, from kids learning to box in Thailand to Donald Trump’s favorite salad.

Every year,  Pop-Up Magazine goes on tour to cities around the country with different contributors, themes and audiences.

The California Sunday Magazine -- a feature and photography publication printed bi-monthly -- will produce a special issue this December where all stories will be told through photography, focusing on the single theme of “Home."

California Sunday will also expand the issue’s cover story into an exhibition at Aperture Gallery in New York, turning the gallery space into a magazine feature audiences can walk through.

The two companies are currently piloting a new event series called Pop-Up Zine, a DIY version of Pop-Up Magazinefor journalists and other creatives across the country to produce their own live magazine–style events for their communities.
cause-related, events, magazines, publishing
Next story loading