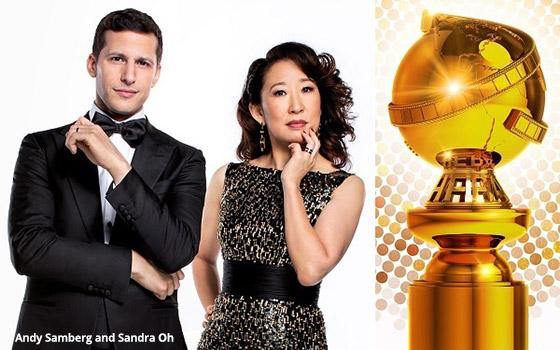 What does the TV Blog have in common with the Golden Globe Awards? Neither has ever won an Emmy Award.

The fact that no Emmy category (or Golden Globe category, for that matter) exists to honor Outstanding Writing in Television Criticism is certainly a grievous oversight with which few would argue.

But awards shows win Emmy Awards all the time -- all except the Golden Globes. I looked it up in the TV Academy's online Emmy database.

Let the record show that the Golden Globes have received numerous Emmy nominations over the years, but no statuettes. By contrast, the Oscars and Tony awards have won many Emmys. The Grammy Awards have won Emmys too.

As a matter of fact, even the Emmys have won Emmys, although not since 1977, according to the database. Perhaps the practice of awarding its own telecast was considered unseemly and quietly done away with.

Meanwhile, the Golden Globe Awards soldier on. This year's edition arrives this coming Sunday night (January 6) for three hours on NBC. Andy Samberg and Sandra Oh (pictured above) are the co-hosts.

Maybe the Golden Globes have received no Emmys because this awards show is so hard to peg. Quick! Name any member of the Hollywood Foreign Press Association that you have ever heard of.

Stumped? Join the club. No one knows who these people are. And yet, they manage to commandeer three hours of network prime time every January.

For reasons that are not quite clear, the Golden Globes have a reputation for spontaneity and unpredictability.

This seems to stem from the widely accepted belief that half or more of the audience in the room at this awards banquet are well-lubricated or well on their way to lubrication from the consumption of wines and spirits in the hours leading up to the start of the TV show.

The Golden Globes also earned a reputation for pointed humor when it first instituted the concept of an annual celebrity host.

Fun fact: This dates back only to 2011, when Ricky Gervais hosted for the first of three consecutive years. Before that, the Golden Globes had hosts only one other time -- in 1995 (John Larroquette and Janine Turner, according to Wikipedia).

Gervais became known for delivering monologues at the start of the show that took savage aim at his fellow celebrities in the Golden Globes audience.

At the time that he first did this (and when he continued to do this in subsequent hosting stints), his comedy drew praise for the way it seemed to puncture the pomposity we associate with televised entertainment awards shows.

Tina Fey and Amy Poehler tried to continue this tradition when they co-hosted the show for three years following Gervais.

But as time has gone on, comedy -- specifically, the freedom comedians once enjoyed for saying pretty much anything that came to their minds -- has lost its edge.

Today, comedians performing in a public venue such as a televised awards show would be well-advised to keep the quips as bland and harmless as they can.

As it happens, neither Andy Samberg nor Sandra Oh have a reputation for offending anyone, so the world, and social media, can breathe easy on Sunday night.

Of course, on the Golden Globes and other awards shows, comedy has given way in recent years to feel-good political commentary.

For example, last year's Golden Globes were enlivened by a speech delivered by Oprah Winfrey, so rousing that rumors then swirled that she was using this awards telecast to test the waters for a presidential run.

Mercifully, she issued a statement a short while later saying this was not her intention.

Other than Elizabeth Warren turning up by surprise at Sunday's Golden Globes, the TV Blog does not expect any 2020 presidential campaigns to be launched during the show -- unless Sandra Oh has presidential aspirations she has kept under wraps until now.