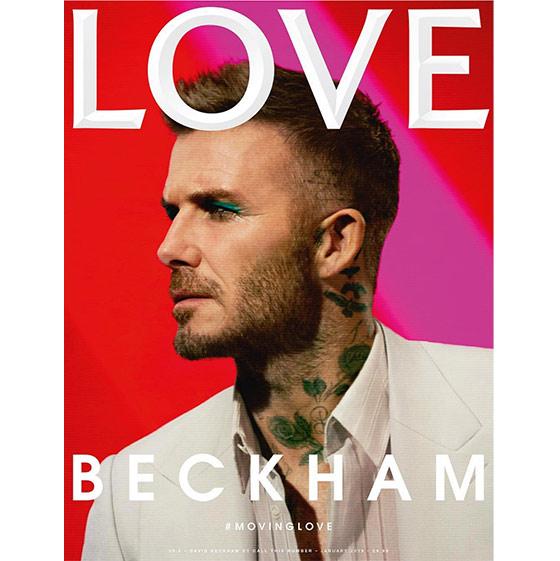 The biannual style glossy from Conde Nast Britain is racking up thousands of “likes” on its Instagram account whose audience of 1.2 million followers is tiny compared with Beckham’s 53.3 million.

More importantly, Love has generated gushing press coverage from other fashion publications that describe the cover as “stunning” or “ballsy and brilliant and bold.” The choice of green eye shadow even solidifies the color as the trend for 2019, according to Grazia columnist Chrisanthi Kaliviotis.

Beckham appears on the cover wearing a white suit and unbuttoned shirt against a red background. He’s looking off-camera in a pose that shows a series of tattoos running up the side of his neck and into his close-cropped scalp. His beard is short and slightly scruffy in the popular lumber-sexual style.

The key difference from other photo shoots is Beckham’s teal-green eye shadow, which is getting early attention. The cover may even gain notoriety.

Beckham’s little smudge of eye shadow actually looks tame — the shade even matches his fading tattoos. And despite the breathless comments on Instagram, the cover doesn’t portend a broader trend of men wearing makeup outside of playing drums in an emo band. It's a gimmick.

Since Olympic icon Bruce Jenner transitioned into Caitlyn Marie, announcing her transgender identity for a July 2015 cover story in Vanity Fair, it’s not that remarkable to see athletes who ooze masculinity wearing makeup, in any context.

Social media is replete with makeup tutorials from men, including hugely popular demonstrations from telegenic YouTubers like James Charles, who has 13 million subscribers. It was more than two years ago when Cover Girl named Charles as the first-ever male spokesperson.

He’s bigger on YouTube than Vogue magazine, which only has 4.1 million subscribers to a channel that’s devoid of personality.

At least Love is trying.