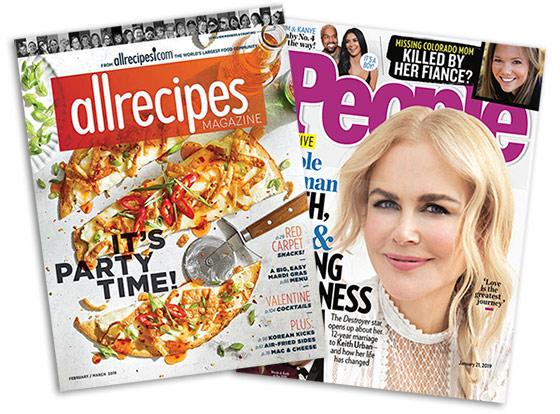 With awards season come award season parties,a and two of Meredith Corp.’s brands are aligning to offer exclusive content to the hosts of these gatherings.

People and Allrecipes each provide readers with custom-curated food and entertainment content in their latest issues, including entertaining ideas, cooking tips and celebrity-contributed recipes from chefs like Wolfgang Puck.

The new editorial partnership is sponsored by Reynolds Wrap, Philadelphia Dips and Glad. The content is created collaboratively and will appear in each brand’s print edition.

Cornering special seasons and events is another way that brands are using data and audience metrics to leverage user numbers and popular content.

According to Comscore Fusion, readers of People are 38% more likely to tune in to awards shows than the average U.S. adult. They are frequent entertainers, hosting guests at home more than twice per month. Allrecipes users are 21% more likely.

The awards season content will appear in Allrecipes’ February/March 2019 issue, while People will share the content in its January 21, 2019 issue. Both issues are on newsstands now.

Allrecipes has also done well leveraging its audience in the digital realm.

During the Thanksgiving holiday, Allrecipes reported record traffic, along with EatingWell — which has since absorbed Cooking Light to create one stronger print brand — and MyRecipes. The brands in total captured 25% of category search and counted nearly 11 million visits on Thanksgiving.

As a result of anticipated strong traffic numbers, the media company was able to attract sponsorship from a national retailer.