Hand-Holding The Candidates: How We Announce Now 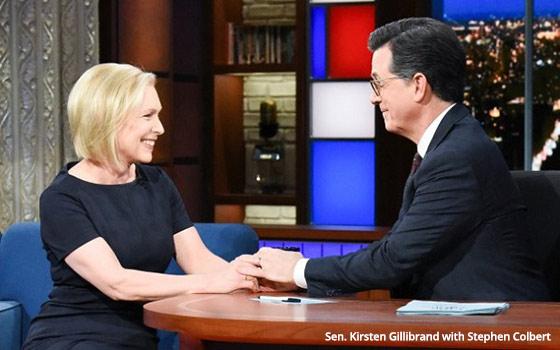 At least Senator Kamala Harris had the good taste to announce her campaign for president on an actual news program.

Not so for Senator Kirsten Gillibrand. She went on a late-night comedy show, “The Late Show with Stephen Colbert” on CBS, to announce her candidacy for president between giggles.

Harris, 54, a Democrat and junior senator from California, has served in the United States Senate for just two years.

And yet, by going on ABC's “Good Morning America” to announce her candidacy on Monday morning -- January 21, Martin Luther King Day -- she projected a seriousness and gravitas beyond what one might expect from a U.S. senator just two years into her first term.

By contrast, Gillibrand, also a Democrat and the junior senator from New York, has served in the Senate for 10 years.

But in her recitation of some pre-rehearsed boilerplate about her love of children on “Colbert,” she was much less impressive than the less experienced junior senator from California.

This last point is not meant to be sexist, since how candidates both male and female look on TV has a direct bearing on how they comport themselves and how they come across.

The “looks” notion is not about beauty or wardrobe choices. It is just about how people appear on TV, which is, after all, a visual medium.

In this respect, Harris came across as more purposeful and mature, while Gillibrand came across as someone who had decided to run for president seemingly for the fun of it.

Take the way Gillibrand made her announcement on “Colbert.” When it came time to recite her answer to Colbert’s question about her candidacy (which he posed at the very outset of her segment last Tuesday, January 15 -- Dr. King’s actual birthday), she became so excited and giddy that she reached across Colbert's desk and suddenly took his hands, as if she needed this physical contact with this late-night comedian to get her through this big announcement.

“I'm filing an exploratory committee for President of the United States -- TONIGHT!” she said awkwardly, placing a great emphasis on the word “tonight” while she leaned in, smiled broadly and stared directly into Colbert's eyes.

Colbert evidently was not surprised she would make this announcement on her show. It was obviously pre-planned. He then said, “We are honored that you are here. Why do you want to be President of the United States?”

With that, she was off and running, reciting a script she had apparently memorized that did not really answer his question but touched on various clichés that candidates trot out, such as the battles she says she would wage on behalf of America's children.

“I'm going to run for President of the United States because as a young mom [she's 52], I'm going to fight for other people's kids as hard as I would fight for my own, which is why I believe health care should be a right and not a privilege!” she declared as an applause sign apparently lit up and the studio audience cheered.

“That's why I believe we should have better public schools for our kids because it shouldn't matter what block people grow up on [more cheers] and I believe that anybody who wants to work hard enough should get whatever job training they need to earn their way into the middle class, but you are never going to accomplish any of these things if you don't take on the systems of power that make all of that impossible, which is taking on institutional racism, it's taking on the corruption and greed in Washington [more cheers], taking on the special interests that write legislation in the dead of night and I know that I have the compassion, the courage and the fearless determination to get that done,” she said, completing this run-on sentence as the audience cheered wildly.

On “GMA” on Monday morning, Harris had no cheering studio audience -- which made the segment better than Gillbrand's. She just had Robin Roberts and George Stephanopoulos to contend with as she gave answers without the gushing that characterized Gillibrand's over-anxious announcement on the “Colbert” show.

“Do you have an announcement you want to make?” asked Roberts, who, like Colbert, knew the answer that was coming.

With her two years in the Senate in mind, Stephanopoulos then asked her: “What qualifies you to be commander in chief?”

“And this is a moment in time that I feel a sense of responsibility to stand up and fight for the best of who we are,” she said. “And that fight will always include, as one of the highest priorities, our national security.”

Whether or not one agreed with her views, for the remainder of the segment, Harris came across as thoughtful, sincere and sensible -- just the opposite of the junior senator from New York.

news, politics, tv
5 comments about "Hand-Holding The Candidates: How We Announce Now".
Check to receive email when comments are posted.
Read more comments >
Next story loading