Half Of Conan Is Better Than None 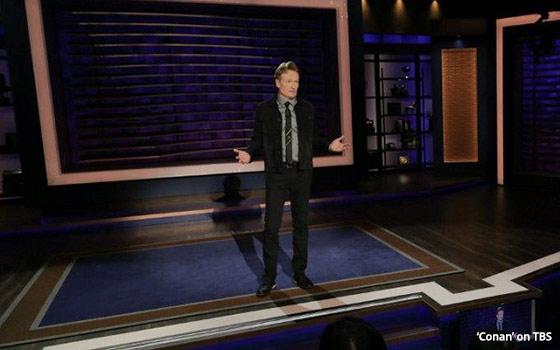 Conan O’Brien returned to his 11 p.m. time slot on TBS this week missing half of his show.

The show is still called “Conan,” only now it's smaller. Not only has it been reduced from an hour to a half-hour (actually, 21 minutes plus nine minutes of commercials), but there is no band either.

The new half-“Conan” show made its debut Tuesday night on TBS. The new half-length plan was first announced last October and O'Brien had been off the air since about that time.

When he returned this week, he was dressed more casually than before, appeared on a smaller stage on a set that has been completely redesigned (photo above), and performed before a studio audience that also seemed smaller than before.

Also gone was the traditional desk of a late-night host. Instead, during the show's only guest-chat segment, Conan and sidekick Andy Richter (yes, he's still here) sat on chairs on either side of the evening's sole sit-down guest, Tom Hanks.

In his opening monologue, which ran to four-plus minutes, Conan applied the handy subject of the federal government shutdown to his own situation.

“It is great to be back,” he said. “I'm happy to announce right now that the three-month Conan Shutdown is over! President Trump, this is how it's done, right? I'm back on the air because I compromised on tariffs and the wall!”

He then poked fun at the reductions his show has gone through. “We are back with a 30-minute show,” he said. “I don't want you to worry about that. It may be only 30 minutes but, I assure you, it's going to feel like two hours!”

As for the clothes he wore, he has apparently eschewed his customary suits for, in this case, a short leather jacket, tie and jeans -- a new look he described as “hip biology teacher.”

The “Conan” show cutback happened because the one-hour format was no longer viable. Or to put it another way, the old “Conan” was not drawing ratings that made an hour show airing four nights a week (Monday through Thursday) worth the money it cost to produce it.

And yet, TBS apparently likes being in business with the Team Coco brand, and somehow came up with the idea of shrinking Conan's show to a half-hour as a way of keeping their relationship going.

And Conan agreed. How easily he agreed, or whether Conan and his team fought against it, is not known. Or at the very least, a handful of stories out recently do not paint a picture of conflict arising from this half-hour plan.

In a New York Times story earlier this month, executive producer Jeff Ross said in an interview that losing the band was “painful.”

That same Times story reported on how far the old “Conan” show had fallen in the ratings -- from about 1 million viewers per episode in 2011 to 300,000 when the one-hour show ended last fall.

The decrease stems from the usual suspects: Declining audiences generally for so-called linear TV, and fierce competition for viewers in late night. And parts of Conan's audience itself have evidently drifted away, and possibly elsewhere.

At age 55 (56 this coming April), O’Brien is the oldest host in late-night (although Stephen Colbert is only one year younger). But perhaps more significantly, O'Brien is by far the longest-running host in late night who is still on the air -- 25 years and four months.

Although bandleader Jimmy Vivino and company -- known as the Basic Cable Band -- didn't make the cut, the show featured music anyway -- recorded music applied in such a way that the band was not necessarily missed.

And at 30 minutes, the new “Conan” represents a new experiment in traditional late-night TV -- the same old-fashioned lineup of monologue, comedy bit and then a guest segment -- but all undertaken in a brisk 21 minutes.

Maybe it will work. Richter apparently thinks it can. He told the Times: “We have been doing the same thing for 25 years. [The new show is] just us, jammed into the half-hour that was the only part of the show people really watched anyway.”

tv
2 comments about "Half Of Conan Is Better Than None".
Check to receive email when comments are posted.
Read more comments >
Next story loading