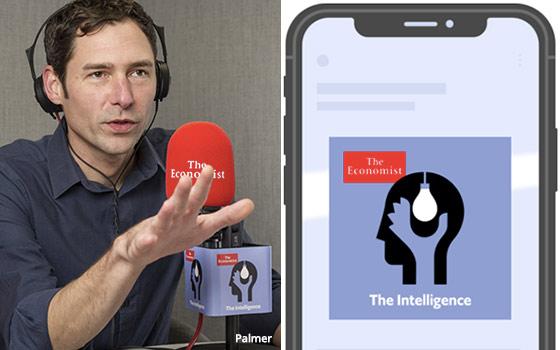 The Economist is giving The New York Times a run for its money with a new daily news podcast.

But unlike The Times’ immensely successful “The Daily,” The Economist’s podcast, called “The Intelligence,” will focus on global news. (“The Daily” focuses primarily on political and social issues facing the U.S.)

The first episode will premiere next Tuesday morning.

It is The Economist’s first daily podcast, though the media brand has been producing audio shows since 2006.

“The Intelligence” will be hosted by Jason Palmer, a co-editor of "Espresso," The Economist’s daily morning-briefing app. Each episode will run 20 minutes and have three parts: analysis of a big news story of the day, a feature and a lighter topic to close the show.

Palmer will work with a team of eight editors and producers.

The Economist’s current podcast line-up had over 7 million downloads and streams per month in 2018, according to a spokesperson.

Since its launch in February 2017, The Times’ “The Daily” has drawn 5 million unique monthly listeners and airs on over 30 radio stations nationwide. Earlier this year, The Times announced it plans to turn “The Daily” into a 30-minute TV show called “The Weekly,” set to air on FX and Hulu.

In December,The Wall Street Journal announced it was joining the race and creating a new daily podcast in partnership with Gimlet Media.

The Economist has been ramping up its brand push in the U.S. and U.K. It ran its first brand ad in a decade on TV stations in both countries this month, in tandem with a direct response TV ad.

The Economist also relocated its CMO to New York in January, hoping to capitalize on circulation and client business opportunities in North America, the spokesperson added.

The Economist has grown digital circulation 15% year-over-year in 2018, according to the UK’s Audit Bureau of Circulations.