TNT '60s Series Bites Off More Than It Can Chew 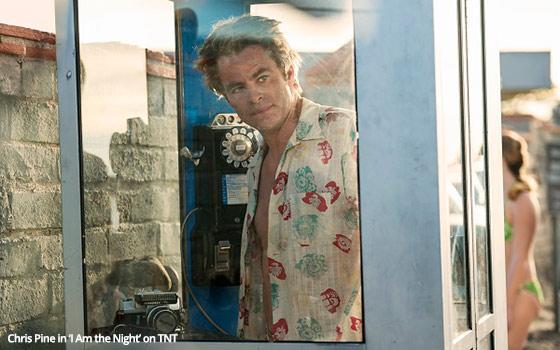 The first puzzle one confronts in this new TNT limited series called “I Am the Night” is its title.

Who or what is “the night”? Who or what is saying “I am the night”? Is the “night” being evoked here as a general metaphor for darkness, as in the darkness in men's souls (and some women’s)?

Or is “I am the night” being spoken by this show's lead character, an ethically challenged reporter whose personality has its own dark spaces, including substance abuse and a decidedly downscale lifestyle?

Or maybe one is supposed to read this title and think “I am the knight,” -- which, here again, may or may not be a reference to this reporter character.

He is the closest character this series has to the archetypal hero of noir fiction and films -- the cynical, world-weary lone “knight” who lives by his own code of ethics or behavior and somehow, often against his own better judgement, cannot help ending up on the side of the downtrodden.

The name given to this one (played by Chris Pine, who is also an executive producer of this series premiering Monday on TNT) is Jay Singletary, which might have been chosen on purpose to underscore his status as a lone wolf.

Or maybe not. The problem is, Jay Singletary is no Phillip Marlowe or Lew Archer. Having said that, Pine is the best part of this series.

He plays the role of a man who has become all too accustomed to hitting rock bottom, ever since he was nearly destroyed by a story he once covered.

The story is one that movies and TV have returned to again and again -- the so-called “black dahlia” murder, a notorious L.A. crime that was never solved.

It involved the murder of a young black-haired woman whose dismembered, mutilated body was discovered in an L.A. park in 1947.

Her name was Elizabeth Short, but she came to be known in the press coverage of the crime as the Black Dahlia -- a nickname with several possible origins.

The thing is, however, this TNT series “I Am the Night” takes place in 1965, some 18 years after the crime. For this reporter to have covered this story back then, he would have had to be approximately 20 years old. (For the record, Pine is 38; his character's age is not specified.)

As it happens, Singletary was a bit of a wunderkind back then, and somehow became a reporter with The L.A. Times at a very tender age, according to another character in this show.

He has apparently been down and out ever since, subsisting on bottom-of-the-barrel freelance assignments and sharing his cocaine stash with hookers. And now, in 1965, an anonymous phone tip about this all-but-forgotten case has him thinking he might be able to redeem himself at long last.

But wait -- The Pine character is not the only principal figure in this drama. The other is a young woman, played by India Ainsley, who comes to L.A. from Nevada in search of her real family.

And this family she seeks might be mixed up in the Black Dahlia murder (and possibly some other ones too).

Evidently, the paths of this reporter-knight and this young woman known as either Pat or Fauna are destined to cross.

As their paths wind toward this inevitable intersection, there is one other subject this series has decided to chew on -- race, and the state of white-black relations at the mid-point of the 1960s.

The young woman character named Fauna (or Pat) had a white mother and black father, which is a secret that her birth family has made every effort to bury.

Pat (or Fauna) is light-complexioned, so much so that various characters and authority figures express surprise when they learn that she at least partly African-American (which in those days qualified her as black).

Thus, this young woman is meant to carry the weight of the 1960s civil rights struggle smack dab on her slender shoulders, which is quite a responsibility to put on this character.

The various storylines -- the down-and-out reporter seeking redemption with a story that almost destroyed him, the mixed-race young woman undertaking a naïve search for her original identity, and race relations in America -- do not exactly gel here.

In this way, “I Am the Night” seems to be biting off more than it can chew. Despite the costumes and vintage cars, the show's 1960s time frame comes across as inauthentic -- like play-acting more than acting.