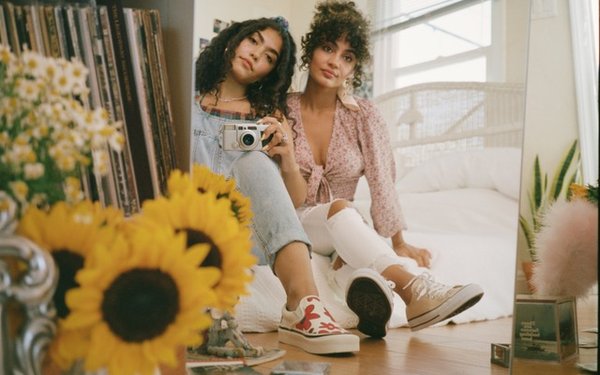 American Eagle, a brand with one of the strongest holds on American teens, has handed the marketing reins over to Gen Z for its new spring campaign.

The campaign focuses on the Pittsburgh-based retailer’s strength in denim, especially Ne(X)t Level Jeans, as well as the rest of the spring collection.

American Eagle found all ten cast members via social media, and says the campaign is shot entirely in their own environments, rather than an “exotic location or contrived set.” And instead of using professional stylists, cast members photographed themselves using iPhones and disposable and medium format film cameras.

Ads are running on the brand’s social-media channels, Google Preferred videos and in stores.

American Eagle also owns Aerie, the lingerie brand that’s made big gains by ditching models. It has been a pioneer in the trend of using real women -- in a variety of shapes and sizes -- in its ads, and was one of the first brands to swear off retouching.

Engagement Labs, a data and analytics firm, ranks American Eagle as Gen Z’s sixth-most talked-about retail and apparel brand, beating out names like Hollister, Vans and Abercrombie. Nike and Adidas are the most talked-about brands, followed by Forever 21, Victoria’s Secret and Air Jordan.

The new campaign comes just weeks after the company reported a solid 6% gain in comparable-store sales for the fourth quarter to record levels, on top of a hefty 8% gain in the same period a year ago.

The results beat expectations, and observers say the company is well positioned to benefit from low unemployment.

“As a destination denim business,” writes Jen Redding, an analyst who follows the company for Wedbush Securities, the company also has the potential to benefit “as the industry enters a positive denim cycle and Aerie continues to capture market share.