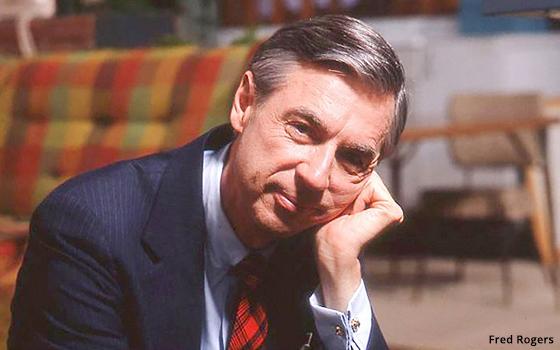 What more can one say about Fred Rogers?

The answer is: Not much, especially in the wake of the phenomenal success of 2018's documentary about his life and work titled “Won’t You Be My Neighbor”? This film pretty much says it all.

The documentary by filmmaker Morgan Neville was a box office hit when it was released to theaters last year. This weekend, it comes to HBO.

The film is a comprehensive rundown of the life story of the man known to one and all as Mister Rogers. Here, family members, long-time friends and colleagues who worked with him on “Mister Rogers’ Neighborhood” all get to share their memories and impressions of this very special man.

Rogers himself is on hand too, in ample interview footage from what appear to be numerous TV profiles that others produced about him while he was alive over several decades.

In many ways, the documentary repeats essentially the same point -- that Fred Rogers was an iconoclast. He was possibly the only prominent personality in the entire TV industry who sincerely believed that television's role, and its power, was to enrich people's lives. He then spent his entire adult life and career trying to fulfill that very mission and succeeded at it.

In the documentary, the point is made over and over again that this soft-spoken ordained minister succeeded in becoming an icon (if not a saint) of childrens' television by essentially not doing whatever everyone else in television was doing.

The documentary makes the point that even at the relatively new PBS (established in 1969), upper management was skeptical about the national prospects for this decidedly low-budget kiddie show that originated from Pittsburgh's public TV station, WQED. They were wrong, of course.

The interviews in the film collectively give an impression of a man who was so sincerely spiritual that he believed he could move proverbial mountains by speaking softly. And this he did. He was the closest TV has ever come to having its own Gandhi.

Simply put, this documentary is great. It is an incisive biography of this one-of-a-kind mountain mover. But it is also a love letter to a past television age -- one that we are unlikely to ever see again.

“Won't You Be My Neighbor?” premieres Saturday (February 9) at 8 p.m. Eastern on HBO.