Fox's 'Proven Innocent' Is A Humdrum Drama About Murder 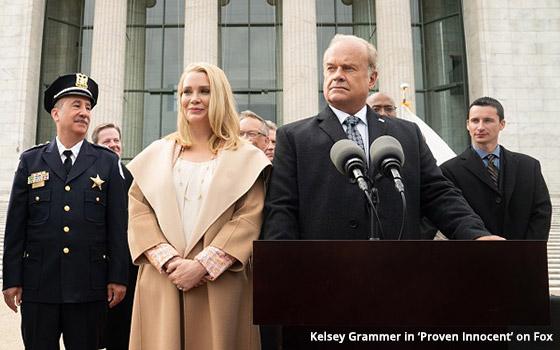 If murder did not exist, what on Earth would approximately 90% of our TV shows be about?

The question arises with the premiere of yet another scripted crime-and-punishment drama. This one is called “Proven Innocent,” and it premieres this coming Friday night on Fox.

Filmed in Chicago, this one comes to TV from executive producer Danny Strong, who also created “Empire.” That show also happens to be made in Chicago.

Not to make a pun out of Strong's last name, but the premiere episode of “Proven Innocent” comes on way too strong. So much happens in this one-hour episode (actually considerably less than an hour with commercials), that it might truly take your breath away.

Unfortunately, the other reaction besides hyperventilating might be disbelief. Eye-rolling too -- as you take in this premiere's air of almost total unreality.

It is a crusading-attorney drama, pitting an earnest young female attorney fighting for the rights of the wrongfully accused against the city and state (Illinois) legal establishment represented by big bad Kelsey Grammer.

He plays an ambitious Chicago prosecutor named Bellows who aspires to become attorney general of Illinois and then governor. He is a tough-on-crime prosecutor whose zealotry in his pursuit of convictions has resulted in a number of cases in which suspects were convicted wrongfully based on trumped-up evidence.

This young attorney -- played by Rachelle LeFevre -- is just as zealous in taking up the cases of Bellows’ wrongfully convicted convicts. Her motivation? She too was wrongfully convicted 10 or more years earlier as a teen (along with her teenage brother) of the murder of a teenage girl named Rosemary who happened to be their friend.

So she studied real hard while in prison. And then, upon her release, she was accepted to Yale Law School, naturally. By now, you have probably guessed who put her away in the first place -- Bellows!

Boy, did he ever make a mistake putting her in prison because now that she is out, she is exposing the wrongful convictions he won every couple of minutes or so. Her victories over this long-time state justice department insider come so fast and furious that she manages to free two of his victims in the space of just one episode (the premiere airing on Friday).

Reasonably intelligent people -- even your steadfast TV blogger, whose reasonable intelligence has been questioned by many over the years -- certainly realize that scripted TV dramas are not “real.” But many of them at least strive to conform to the basic contours of what the real world is actually like.

However, the storytelling on view in “Proven Innocent” is like something out of another dimension. Investigations undertaken for a few minutes uncover evidence and witnesses that heretofore were unknown to anyone associated with any of these cases.

Through almost no discernible effort, this crusading attorney and her team come by everything they need to reverse another conviction and carve another notch in their belts. Then, presto! She's scoring another victory over attorney Bellows.

You half expect Grammer as Bellows to react in the same comic, exasperated fashion that Frasier Crane reacted in scenes with his brother Niles or radio producer Roz on “Frasier.”

One of the premiere episode's more preposterous scenes has this lawyer's private investigator -- played by Vincent Kartheiser of “Mad Men” -- recklessly swinging a Samurai sword at the office in close proximity to co-workers.

In the real world, this behavior -- including not only the reckless swinging but the mere act of possessing such a weapon in the workplace -- would have had him instantly fired, if not arrested. In the unreal world of “Proven Innocent,” this does not happen.

When regarding this new show with its courts, criminals, corpses and crusading lawyers, it is easy to ask oneself: Do we really need another scripted TV show about the drama of how and why human beings kill each other? The answer is no. Or at the very least, not this one.