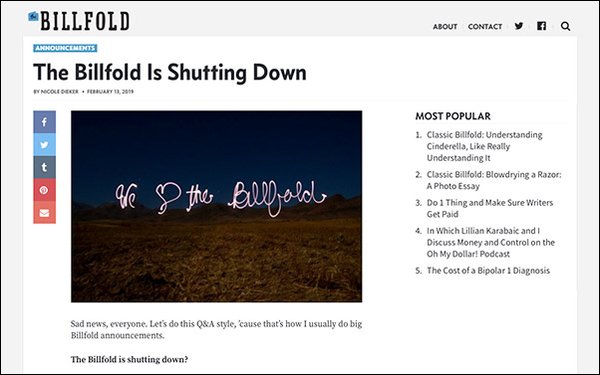 Personal finance blog The Billfold is shutting down after operating for seven years.

Despite “big plans for 2019,” The Billfold founder Nicole Dieker wrote in a post on the site that she “made the mistake that many first-time small-business owners make: quickly setting up an LLC through one of those online legal services instead of discussing everything with a CPA and a lawyer first.”

That, in addition to the fact The Billfold LLC “was an offshoot of an existing business rather than a new business," led to the demise of the blog.

“After beginning the 2018 tax process, realizing what I'd gotten myself into, and having the CPA/lawyer conversation that I should have had a year ago, I evaluated my various options and chose this one," she wrote.

The Billfold's remarkably engaged audience demanded to know more details about what brought the site down.

Dieker published a follow-up post, explaining further: “Without going into the nitty-gritty details — and I'm not going to, so please don't ask — I found myself at the point where continuing to run The Billfoldwould very likely eat up all the money I set aside and cost me additional money out-of-pocket. This was as much a surprise to me as it was to you, since I also thought The Billfold was financially stable. “

Billfold posts will continue to run through Wednesday, February 20.

The archives will remain untouched.

Dieker said she will continue to post regularly onNicoleDieker.com, mainly “about creative work and the creative process,” and “the way money intersects with both of the above, as well as reviewing books about creativity/side hustles/personal finance, sharing relevant articles, etc.”

She will also contribute to Oh My Dollar!, which is “going to be providing a lot of what you’ve come to love at The Billfold: posts about various aspects of personal finance, plenty of opportunity for discussion, a weekly podcast, and a forum.”

The Billfold was part of the The Awl Network, which once ran a group of four websites until it closed the women-focused site The Hairpin and indie news and pop-culture site The Awl in January 2018, citing a tough revenue climate for independent publishers.

In 2017, The Awl Network had taken its sites off online-publishing platform Medium.