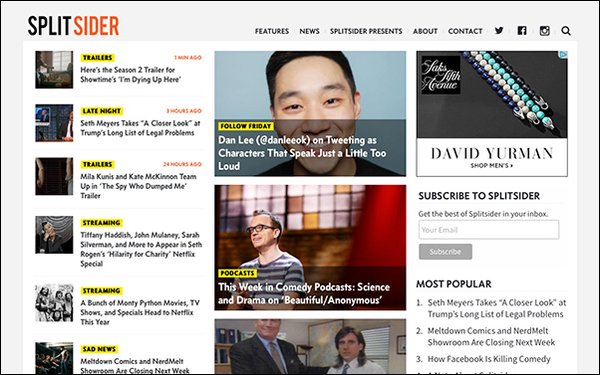 New York Media, the publisher of New York Magazine and other media brands, has acquired comedy site Splitsider from The Awl Network.

The Splitsider.com web address will continue to operate as usual until May, when Vulture’s comedy vertical will launch to coincide with the 2018 Vulture Festival in New York City. Then the site will redirect to a landing page on Vulture.com.

“We long had designs on comedy becoming as important to Vulture as TV and movies are,” stated New York Media editor-in-chief Adam Moss. “The acquisition of Splitsider helps us do it faster and roots our coverage in the beloved home for comedy fanatics.”

The acquisition of Splitsider is part of an effort to make Vulture more attractive to marketers at Apple and Amazon, which are making significant investments in original programming, Pam Wasserstein, CEO of New York Media, told The Wall Street Journal.

Vulture already has comedy coverage on its site, mostly led by Vulture senior editor Jesse David Fox, but the addition of Splitsider will mean the vertical will expand its text and video content, as well as grow into live events, podcasts and brand partnerships.

Splitsider’s editor Megh Wright will join Vulture. The new comedy department at Vulture will also be overseen by Fox.

Splitsider founder Adam Frucci stated:  “I'm confident that with New York Media's vision and resources, it will be cemented as a beautiful comedic oasis in the desiccated husk of the internet Mark Zuckerberg has left us all with.”

“The goal is to build upon what each site has done to define the future of comedy journalism, be it written, video, audio, events, or something that hasn’t been invented yet. Maybe a version of comedy journalism you could eat? Who’s to say?” Fox wrote in a note to readers on Vulture’s site.

The Awl Network ran a group of four websites until it closed the women-focused site The Hairpin and indie news and pop-culture site The Awl in January, citing a tough revenue climate for independent publishers.

The Awl Network now only oversees The Billfold, a personal finance site aimed at millennials.