Derided By Kimmel Last May, ABC Show Gets Post-Oscar Premiere 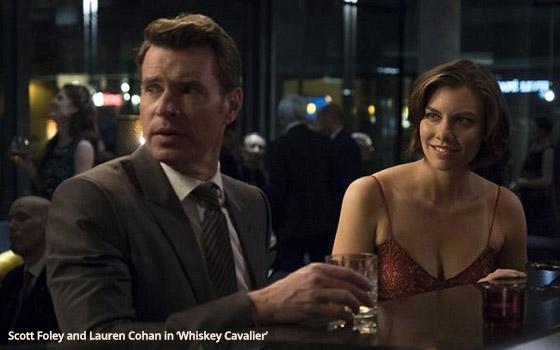 ABC appears to be taking a page from the Super Bowl playbook with its plan to introduce a new action series following the Academy Awards this coming Sunday night (February 24).

Networks have tacked a new show onto the remaining evening hours following the Super Bowl for decades. But this Sunday's Oscars would seem to be the first time ABC has seen the Oscars in the same light -- as a high-profile launchpad for a new show.

In this case, the show is “Whiskey Cavalier,” an action show pitting a swashbuckling FBI agent played by Scott Foley against an equally skillful CIA agent played by Lauren Cohan (they are both pictured above).

In terms of lead-in audiences, the Oscars and the Super Bowl are not in the same league. Last year's Oscars drew 26.5 million U.S. viewers. The recent Super Bowl on CBS drew about 98 million, which is actually low for recent Super Bowls.

CBS used the Super Bowl this year to launch its new talent-competition show “The World’s Best.” With the Super Bowl, the show that lands in the coveted time period after the game at least gets to air partly in prime time.

With the Oscars, however, “Whiskey Cavalier” will be lucky if it airs at midnight. Odds are that it will air well after midnight in the wee hours of Monday morning. Perhaps it will get some viewership in Western time zones. In the East, however, few will stick around to watch it on what is essentially a school night.

“Whiskey Cavalier” is scheduled to take up its regular time period next Wednesday (February 27) at 10 p.m. Eastern following ABC’s Wednesday comedy slate. The episode will be the same one -- the pilot -- that is scheduled for after the Oscars.

Considered on its various merits, “Whiskey Cavalier” is not a bad show. But for some reason regarding this show, I cannot seem to forget the way Jimmy Kimmel lambasted it last May at ABC's upfront in New York.

Kimmel gives these comic monologues every year at ABC's upfront, in which he pokes fun at his own network. Although it's very entertaining, I questioned in a TV Blog last May whether it was really in ABC's best interest to have its late-night star deride the very shows the network is trying to present as new, exciting and worth spending money on for sponsorships and commercial time.

Cut to the present day, and I can still remember what he said (aided, of course, by last spring's blog). “We're also picking up a show called ‘Whiskey Cavalier’ that we'll learn about in a moment, which is exciting because it took a while, but we finally came up with a title worse than ‘Cougartown’!” Kimmel said.

'Whiskey Cavalier'," he continued, "is described as a high-octane, hour-long, action dramedy that follows the adventures of tough but tender FBI super-agent Will Chase whose code name is Whiskey Cavalier. Should we cancel it now or would you rather wait?"

Then, moments after Kimmel condemned this show to cancellation sight unseen, the show's two stars had to come onstage to promote it, which was awkward.

In the premiere episode of "Whiskey Cavalier," these two agents compete in a journey across Europe -- from Moscow to Paris, with a number of stops in between -- in pursuit of an American computer hacker who is suspected of selling government secrets to the Russians.

As often happens with shows such as this, aspects of the plot are implausible and nonsensical. For example, at one point, the female agent is behind the wheel of a car when the windshield right in front of her face is riddled with bullets. And yet she emerges unscathed. The scene is ridiculous.

Despite its many lapses, the show is fun to watch anyway. The European locations seem authentic, and the show benefits from other clever touches too, such as one action scene that is enlivened by the playing of a Russian-language version of the Rolling Stones song "Paint It Black" on a car radio.

“Whiskey Cavalier” premieres with a pilot preview following the Oscars Sunday night (February 24) on ABC. The show premieres in its regular time period on Wednesday, February 27, at 10 p.m. Eastern.