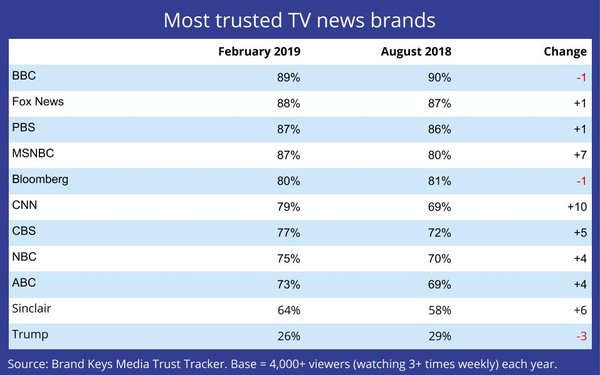 We planned to wait until after the midterms to conduct our second wave, but delayed it, due to the government shutdown and waited until after the President’s State of the Union address and fielded it Feb. 6.

To determine how much the value of “trust” engendered when it came to individual news brands, 4,060 viewers rated the brands watched regularly (3+ times a week) via the Brand Keys Emotional Engagement Brand Analysis.

The top three ranking remained essentially unchanged with the BBC again in first place, followed by Fox News and PBS.

While Sinclair isn’t a network newscaster, we began tracking it in wave one, because it has made a commitment to programming a strong right-wing political news perspective across its local stations. The strategy appears to be paying off, as Sinclair’s trust level jumped 6 points between the two waves.

In an Oval Office interview with The New York Times reported on Feb. 1, President Trump, who has called himself “a victim” of unfair news coverage said: “I do notice that people are declaring more and more fake news, where they go, ‘Fake news!’”

That said, the news trust perceptions of Americans appears to be going in the opposite direction, even among respondents who declared themselves Republicans.