'Jeopardy!' Is Jarring When Game Gets Gimmicky 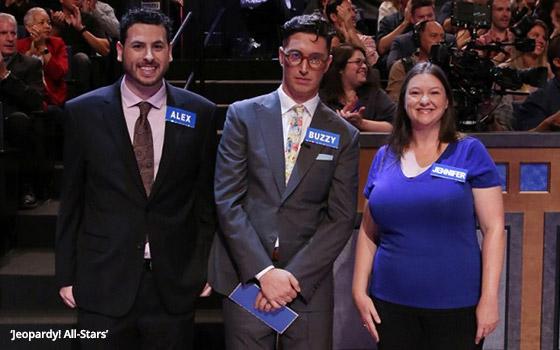 It was jarring on Wednesday evening to tune into “Jeopardy!” only to soon learn that more than half of the show would be taken up with explaining the show's two-week “All-Star” competition scheduled to start that day.

The whys and wherefores of this competition were complicated enough. But then Alex Trebek introduced the players, did brief interviews with them, and brought on their team members. Meanwhile, “Jeopardy!” fans at home sat there wondering when the game would begin.

Teams? On “Jeopardy!”? Yes, for two weeks starting with the competition that finally began more than halfway into Wednesday’s half-hour show. It concludes March 5.

Why should this be so jarring? As we learn throughout our lives, the only constant is change. And yet, changing the format of “Jeopardy!” -- even temporarily -- nevertheless rubbed us the wrong way.

Yes, we understand the “only constant is change” bit. But where “Jeopardy!” is concerned (along with its hallowed companion quiz show “Wheel of Fortune”), change is the enemy.

We are habitual “Jeopardy!” watchers for several reasons, but the simplest one is: This show gets right into the game at the very outset and continues in this vein until the very last “Final Jeopardy!” segment.

The brief player-chats that Alex has with each of the day's contestants just after the first commercial break do not count as disruptions. These have been around so long that these too are accepted parts of the “Jeopardy!” experience.

For us, “Jeopardy!” and “Wheel” should be as reliable as walking into a room, turning on a light switch and expecting the lights to go on. They are TV shows, but they are also like utilities.

One of the joys of “Jeopardy!” is the thrill of playing along. That was perhaps the ingredient that was most missed during all of the introductory and expository hijinks on view for most of the show on Wednesday night.

The exposition itself was near-impossible to follow in any case. This was partly due to the necessity of trying to get over the shock of not having a “Jeopardy!” game to enjoy right at the moment we expected it -- at a few seconds after the opening titles rolled at 7 p.m. (Eastern).

By the time we realized that this episode of “Jeopardy!” was not going to get to the game anytime soon, it was too late to begin paying attention to Trebek’s long-winded explanations about how this “All-Star” tournament was going to work.

The broad outline is that this tournament will consist of teams of three players each. The teams are headed by some of the most successful and notorious players to ever play the game, including Buzzy Cohen (shown with teammates in the photo above), Ken Jennings, Colby Burnett and Brad Rutter.

There was also something off-putting about the actual game when it got underway on Wednesday. The players seemed overly excited, like children on a sugar high. There were hand gestures, self-congratulatory expressions such as “Yesss!” and even some contrived trash-talking. It was as if “Jeopardy!,” which happens to be one of the classiest shows in the entire history of television, had morphed into TV wrestling or the NBA.

By the time the show had ended, it had us thinking we are likely to now take a two-week break from watching “Jeopardy!” rather than endure this “All-Star” competition. Certainly, this reaction would run counter to the goals of this special tournament, which is to drive viewership, not repel it.

Nevertheless, in an ever-changing world, the last thing we needed or expected was for “Jeopardy!” to change too. At least it is only for two weeks.