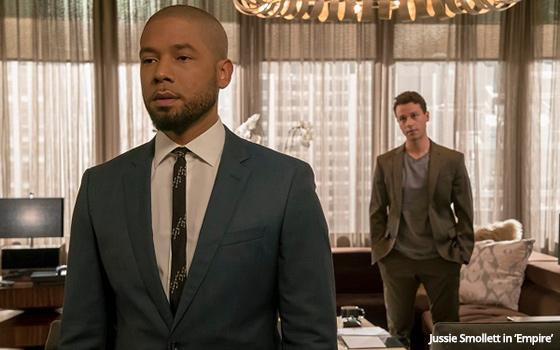 Up until now, the TV Blog has avoided the Jussie Smollett story.

First, there have been doubts about whether this sordid story of an apparently made-up racial and homophobic attack even qualifies as a subject for a TV column. While Smollett is an actor currently featured on a prominent TV show, this story has more social and criminal connotations than TV connections.

On the other hand, as I have long insisted, almost anything happening in the world can be turned into the subject for a TV column, since stories of this nature turn into lead stories for TV newscasts and news channels all the time. They are then discussed and dissected on TV for days on end.

And since Smollett is one of the stars of “Empire” on Fox, the issue of how the show and the network are handling this crisis also qualifies it for TV column treatment.

On that subject, the view from here is that the show and the network were blindsided on this one. For many of the people involved in the show and who work at the network -- particularly the network's PR reps who end up on the front lines dealing with this kind of thing -- this situation was probably a new one.

It had never happened before -- a prominent cast member on a hit TV show making up an elaborate story about a late-night assault that then becomes discredited, or worse, proven to be a hoax (or so insists the Chicago police). He then ends up facing charges.

The network and the show were correct in waiting for actual charges to be filed before making the decision to write Smollett's character out of the shows that remain to be produced for the current season. (New episodes of “Empire” start up on March 13.)

Certainly, they might have been justified in making this decision simply in the wake of the stories that merely questioned his assault yarn, since such stories serve as distractions that could have potentially undermined the show. But if the assault was proven beyond a doubt to have been real, the network would have faced a PR crisis when it could not justify jettisoning Jussie.

The actual charges make their decision a no-brainer. With Smollett now officially in hot water, viewers would have been jarred by seeing his character continue on the show. And while I have not spent time on the sets of TV shows, it is reasonable to imagine that the controversy swirling around this actor would also present distractions and obstacles to the production process. So out he went.

Like so many stories of this type (even if the particulars of this one are in many ways unprecedented), the chat media quickly took it up. In the hands of the talk-show hosts on the news channels, the story naturally morphed into a debate between the left and the right on the subject of race.

Among other things, the right -- led by Sean Hannity on Fox News Channel -- attacked the left for being so quick to assume Smollett's story was true.

Hannity's views to the contrary, blind acceptance of Smollett's claims was understandable up to a point, since his story was so detailed that it was hard to believe it could be made up.

Or was it? The TV Blog does not make a habit of blowing its own horn, usually. But on this story, I have to say I questioned its veracity from the first moment I heard it -- which means it was possible to feel skeptical about it from the get-go. I felt instinctually that something was very wrong with this tale, as in -- it didn't happen.

It is an example of skepticism born from experience and a long memory. Few who read this will remember this story, but once upon a time, in a TV galaxy far, far away, Morton Downey Jr. -- the incendiary late-1980s talk-show host -- made up a yarn about being attacked in a washroom someplace by white supremacists.

He said they drew a swastika on his face with a magic marker (or some such) and there were photos of Mort with this Nazi symbol on this face. People believed this story for a while too, until it was soon demonstrated that Mort made it up (and drew the swastika himself).

Having said all that, the real reason why the TV Blog avoided this Smollett story was simply because it is so sad. This actor seems troubled. And the hope from here is that he gets help for whatever is bothering him.

tv
1 comment about "Smollett Story Is Sad But Ultimately Unavoidable".
Check to receive email when comments are posted.
Next story loading