With Kristen & Dax, Walmart Cuddles Up To Millennial Mamas 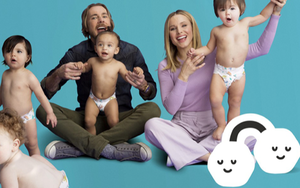 Walmart, looking to make a splash in babies’ bath time, will be the exclusive retailer for Hello Bello, a line founded by actors Kristen Bell and Dax Shepard.

The couple, beloved by millennials for their down-to-earth demeanor, wanted to formulate plant-based products that are better for babies and the planet, yet come in at lower price points than many other brands.

Both Bell, best known for NBC’s “The Good Place,” and Shepard, who has starred in films and NBC’s “Parenthood,” appear in ads for the new lines, using the real-life couple’s trademark humor.

The move comes at a challenging time in the baby business, with the birth rate still falling. Younger parents have fled from brands they perceive as chemical-laden and old-fashioned: The Wall Street Journal, citing Nielsen, recently reported that market leader Johnson & Johnson’s share has fallen to 37%. And even many of the newcomers, such as Honest Co., has seen sales decline.

Euromonitor reports that sales of baby toiletries in the U.S. are estimated to reach $3.15 billion this year, up from $3.12 billion last year.

Parents have also been abandoning conventional retailers, who are scrambling to reinvent themselves as one-stop diaper depots. Target has made its baby business a key strategic area for several years now, powered by the success of its Cloud Island clothing for babies, which also includes toiletries.

And Walmart has also leaned in, following the demise of Babies R Us last year. The Bentonville, Ark.-retailer has expanded its assortment, expanded its online offerings and remodeled the baby sections in about 2,000 of its stores.

Separately, Walmart is feeling heat from an NPR report about the negative impact of its decision to phase out store greeters, many of whom were people with disabilities. It is replacing greeters with “customer hosts,” who will be required to perform tasks like carry bags, stand for long periods and help with security. A spokesperson tells NPR those with disabilities will be given additional time to find other jobs within Walmart before being let go.