Brave Journalists In Venezuela Reveal Journalism Is Not Dead Yet 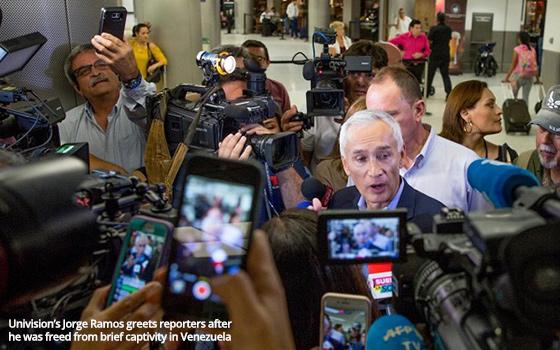 The courage of journalists has come into sharp focus this week with the detentions of TV news people in Venezuela.

The incidents remind us once again that the contribution that such people make to our world is incalculable.

Univision anchor Jorge Ramos had the guts to ask the Venezuelan dictator, Nicolas Maduro, some blunt questions. By Ramos’ estimation, the interview Monday evening in Caracas lasted 17 minutes before Maduro abruptly ended it.

Ramos and at least one other Univision colleague, producer Maria Martinez, were then detained in a room for two hours. During this time, Ramos and Martinez had cause to wonder if they would be killed.

They were eventually released and kicked out of Venezuela after they were searched and their equipment confiscated -- cameras, iPads and cell phones. These items were not returned. Therefore, they were stolen.

Ramos is one of the best-known and best-respected newsmen in all of television in any language. After his release, he wasted no time seeking ways to spread his personal story in as many media, and to as wide an audience, as possible. As an unbiased journalist interested only in the truth, he chose these media without regard to their own political leanings.

On CNN, he was interviewed by Anderson Cooper. On Fox News, he went on the Sean Hannity show. On Wednesday morning, The New York Times published Ramos’ first-person account of what happened on its op-ed page. The headline: “Jorge Ramos: The Dictator of Venezuela Earns His Title.”

According to Ramos, the interview went south from the start when the anchorman asked the strong man if he should address him as “presidente” or “dictador.” The interview ended 17 minutes later when Ramos showed Maduro video footage Ramos and his crew had captured the day before of young men eating food out of the back of a garbage truck.

Ramos had already asked Maduro to comment on his country's failed economy, and on reports that his government imprisoned political dissidents and tortured them. He also asked him to comment on the widespread impression around the world that he stole the two elections he “won” to become president.

Asking powerful people uncomfortable questions such as this is the very pinnacle of bravery. It is not easy to do, except for a very select group of top journalists who are committed to their craft, and also fearless.

On Tuesday came word that a correspondent for Telemundo -- Daniel Garrido -- was taken into custody early in the morning at the hotel where he was staying in Caracas. He was spirited away from the hotel in a vehicle at 6 a.m. with a hood over his head, according to Telemundo.

His equipment was confiscated and not returned. Like the theft of Ramos’ equipment, the aim seemed to be to prevent the footage and interviews that were recorded and stored on various pads, phones and other recording equipment from ever leaving Venezuela.

Garrido happened to be covering the Ramos story for Telemundo, which is Univision’s chief competitor. According to Telemundo, Garrido was held and questioned for six hours before being released. Moreover, Telemundo said, the men who abducted him never identified who they were. Nor did they ever tell him why he had been abducted.

These are stories of great courage that remind us of the great risks scores of journalists take to report on stories in places that are hot spots around the world. The journalists who go to these extreme efforts to find the truth do a great service to the rest of us in this endeavor.

In addition, they serve as great examples for other journalists and would-be journalists. Their work goes against a consensus that seems to be growing today that the practice of real journalism is dead or dying. This is apparently not the case.