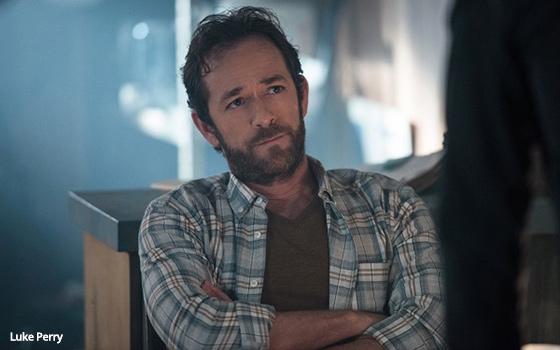 In the midst of writing a rather benign TV Blog yesterday about Fox’s announcement last week that six of the original stars of “Beverly Hills 90210” had agreed to return for a six-episode reunion series, the news broke that Luke Perry died.

Perry, 52 was not one of the six who had signed on for this “event” reunion series. But in a strange and no doubt coincidental twist, Perry reportedly suffered a severe stroke last Wednesday on the very day Fox made this “90210” reunion announcement.

With Perry suddenly incapacitated, no explanation for his passing on this “90210” reunion was ever reported. Conjecture had it that Perry was not always happy with being forever associated with this one TV show. Many stories speculated that this was why he declined to reunite with his “90210” co-stars.

He may have spent the better part of the last 20 years separating himself from “90210” and the character of Dylan McKay, who he played on the show through most of its run from 1990 to 2000.

The role he took up soon after “90210” ran its course could not have been more different. It was the role of a prison preacher in the HBO series “Oz.” In stark contrast with “90210,” “Oz” may quite well be the most violent and sadistic scripted TV series ever made. If Perry was seeking a challenge far removed from “Beverly Hills 90210,” then he evidently found it.

Despite Perry's best efforts, the majority of obits (if not all of them) that began appearing all over the place yesterday all emphasized his connection to “90210.”

Not one of them that I saw mentioned Perry's work in one of the finest TV series ever made -- the short-lived “John from Cincinnati” from writer/producer David Milch. This show lasted all of one season in summer 2007 on HBO. It premiered just after the finale of “The Sopranos.”

This highly literate series about a dysfunctional family of surfers in a rundown beach community in southern California is the show I always think about when anyone asks me the age-old question: What's my favorite show? I never give this as an answer, however, because few people watched it and even fewer would therefore remember it.

It is one of the great unsung masterpieces of the era in the early- to mid-2000s that came to be known as the new Golden Age of Television.

More recently, Perry had been starring as Archie Andrews’ father, Fred, in the CW’s “Archie” comic books update, “Riverdale.” It is a mainstream TV show -- not that unlike “90210,” but a lot darker.

Now, despite the fact that Perry had not signed on to participate, Fox's planned “90210” reunion feels as if it is taking on a little darkness of its own in the wake of his death -- which was definitely not the plan for this six-episode “event” series.

Fox's description of it indicates that it intends to be campy and comedic. The plan calls for the six stars who agreed to participate -- Jason Priestley, Jennie Garth, Ian Ziering, Gabrielle Carteris, Brian Austin Green and Tori Spelling -- to play “heightened” versions of themselves.

In these roles, the six will apparently come together in an effort to reconvene and produce a rebooted version of their old show, although in this one they will all be in their 40s (or nearing 50).

The fact is, the description on Fox's press release was so confusing that it is likely the network has not yet figured out what this series will be. But at least they got six of the cast members to come back (except Perry and Shannen Doherty).

A “90210” reunion was doubtlessly devised in order to attract the now grown-up audience that loved the show when they were teenagers in the 19900s. But Luke Perry was a big part of that generation's TV experience back then. Without him, how can this reunion show go on?