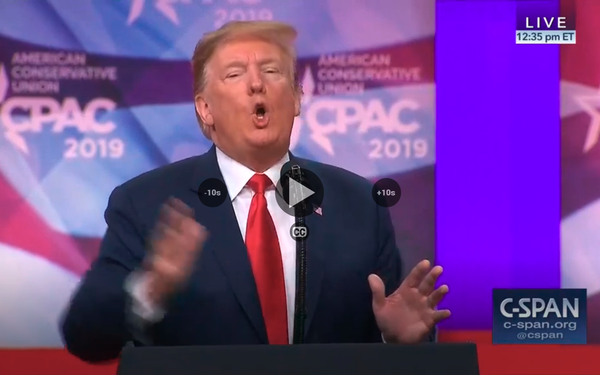 When the President gave a keynote at the Conservative Political Action Committee (CPAC) conference last weekend, it was the first time a President said “bullshit” during a nationally televised address.

It was televised by CSPAN, the American cable TV industry’s public service channel, which you can view below.

Why does this matter? Because Presidents are supposed to use their “bully pulpit” as a “wonderful” platform to advocate an agenda that lifts us up, not one that brings us down into the gutter.

The problem is that it’s his gutter talk that got this President elected in the first place — and he been lowering the pulpit ever since.

Ironically, it’s the word many of his staunchest critics would use to characterize him.

According to reports by The Hill and People magazine, President Barack Obama used that exact language to describe the current President after he got elected, albeit not in public.

While he’s not the first President to bend the truth from time to time, he has set a new low bar for BS.

According to The Washington Post’s fact-checkers, he has lied more than 9,000 times since taking office. About 70% of the factual statements he’s made in public have been found to be false.

At this rate, he will go down in history for creating the bullshit pulpit.

politics, tv
1 comment about "The 'Bullshit' Pulpit".
Check to receive email when comments are posted.
Next story loading