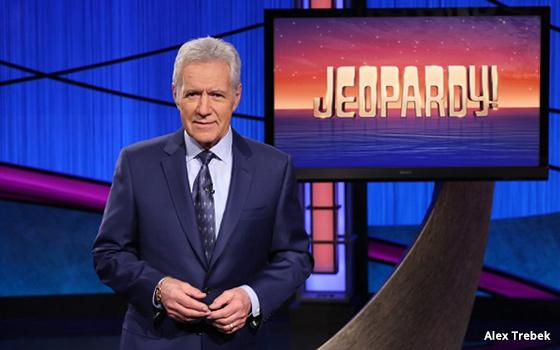 It is the kind of story that you hate to see rise to the top of the day's TV headlines -- a singular personality beloved by all who is suddenly in a fight for his life.

Such a story inevitably becomes the unavoidable subject for the day's TV Blog because, in the scheme of things, what could possibly surpass it?

Such topics present unique challenges -- among them: What can one say? How can one avoid pitfalls in discussing a man's legacy when he is still very much with us? How do you speculate tactfully on the future of his TV show, which happens to be one of the most successful and longest-running shows on TV?

First, perhaps, something almost everyone can agree on: The news about Alex Trebek and his battle with Stage 4 pancreatic cancer was universally jarring and saddening. It had the effect of stopping our day-to-day life in its tracks as we absorbed this news. For me, it came as a text from a friend late Wednesday afternoon.

Then as the day moved into evening, it was played prominently on news-site home pages and TV newscasts. Trebek had announced it himself, via a specially made video that looked like it had been taped on the set of “Jeopardy!”

The video was a class act on the part of Trebek, a man from whom we would expect nothing less. For along with being classified by one and all as “widely beloved,” Trebek also happens to be universally respected, which in a way is an even higher compliment.

He is respected for traits and practices, as they relate to his profession, that are so ingrained that we take them for granted, even though the craft he has perfected in a lifetime on television is on the verge of extinction.

It is the craft of the broadcaster. In no particular order, this role demands a keen attention to details such as diction and grooming. For talents like Alex Trebek, communication skills are everything. And when it comes to grooming, Alex Trebek would never think of hosting “Jeopardy!” wearing anything other than a jacket and tie.

The job requires a high state of mindfulness of one's surroundings -- particularly on a quiz show stage where the host is the sole professional, and he is responsible for managing the comportment of three amateurs, the contestants.

Audiences have watched Alex Trebek apply the fundamentals of professional broadcasting to hosting “Jeopardy!” for 35 years. And there is no doubt that he is widely appreciated for the high standards he maintains.

But unfortunately, he is among the very last of his kind. Today, we live in a slovenly society where almost anything goes, including on television. No one wears jackets and ties anymore on TV -- no one except Alex Trebek and a very small handful of others who represent a generation that is aging out of the TV limelight.

The TV Blog has written on more than one occasion that one of the principal joys of “Jeopardy!” is its reliability. Like flipping a wall switch and expecting the lights to go on, there is “Jeopardy!” every weeknight when we turn on our TVs at 7 p.m. (here in New York).

Alex Trebek is a big part of this show's consistency, which happens to be one of its great values. Of course, Trebek is 78, and we all have long realized that at some point in his 80s, he would relinquish the hosting job to someone else. Hopefully, this person would be just as interested in maintaining the standards he established, and thereby continue “Jeopardy!” in the reliable, traditional manner its millions of fans would expect.

But here is where we risk getting ahead of ourselves. It is not time yet, nor is it appropriate, to discuss Alex Trebek's legacy. Instead, we would rather divert our energies into hoping and praying that he can wage a successful fight against this illness, and remain at his “Jeopardy!” podium as long as he likes.