'Shrill' Comedy On Hulu Forgot To Be Funny 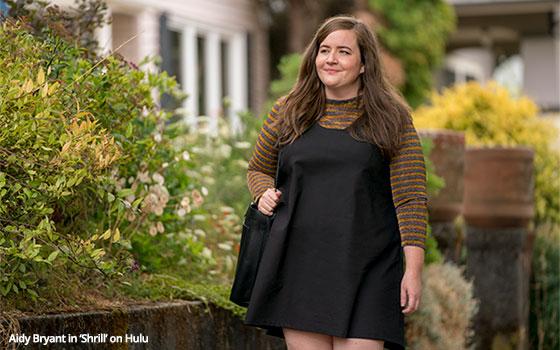 The TV Blog has never claimed to be an encyclopedia of television, but the first episode of the new Hulu comedy “Shrill” contained an abortion scene that might represent a “first” in the annals of TV comedy.

Not that the subject has not been brought up before. That is old hat by now. But in the first installment of this new streaming comedy, produced by Lorne Michaels and starring Aidy Bryant from “Saturday Night Live,” Bryant’s character actually underwent an abortion.

Such is the state of TV comedy -- and possibly comedy in general today -- that the very definition of comedy, or of what audiences are expected to accept as comedic, is an elastic concept, to say the least.

The TV Blog has been on top of this subject for a while now, in the context of a number of comedy series (a phrase in which the word “comedy” should perhaps be positioned within quotation marks) that have appeared in recent years, most notably on FX.

That network's examples of comedies that are not particularly funny -- at least not in the traditional and obvious way that comedy is expected to produce a sensation leading to audible laughter -- include “Better Things,” “Atlanta” and “Baskets.”

The scripts are often literate and the acting is equal to the material. But comedy? No. Despite this, these kinds of shows are almost universally critically acclaimed.

This no doubt emboldens others to develop comedies for television or streaming that are equally devoid of laughs, which the last time I checked, was the object of comedy.

This is all a long-winded way of getting into this discussion about this new Hulu comedy called “Shrill,” which started streaming on Hulu on Friday (March 15). Not only was the premiere episode completely barren of any situation anyone would actually laugh at, but the experience of watching it was among the most unpleasant such experiences in recent memory (yes, even including last week's assignment to watch the dreary new Netflix comedy “Turn Up Charlie”).

“Shrill” is a new comedy in the non-comedic mode. Bryant plays a plus-sized young woman living in Portland, Oregon, who feels persecuted because of her body type. The show is based on a collection of essays assembled in a book called Shrill: Notes from a Loud Woman by Lindy West.

In the TV show, Bryant plays a fictionalized version of the author. She is single, supposedly in her 20s, has a boyfriend who uses her for sex, and she works as an aspiring journalist for an alternative newspaper in Portland.

In the first episode, she became pregnant, which is where the abortion scene came in. Needless to say, the scene was not funny. How could it be?

In “Shrill,” vulgarity has taken the place of comedy. As the first episode wore on, it became clear that provoking laughter was not the goal here. So if that is the case, what are we left with? Basically, a character study of this young woman as she copes with her travails. And there is no fun in that.

streaming, tv
6 comments about "'Shrill' Comedy On Hulu Forgot To Be Funny".
Check to receive email when comments are posted.
Read more comments >
Next story loading