Who Are These People? A Third Of Americans Have No Idea 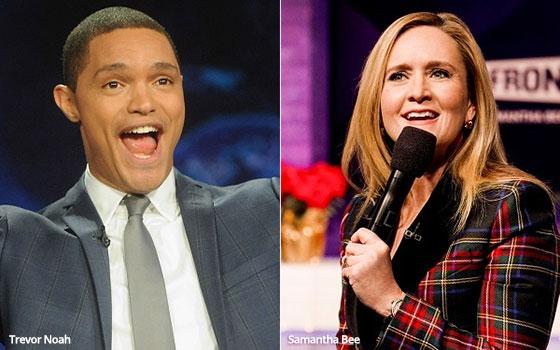 They are continually portrayed and positioned as being in the vanguard of our popular culture -- “influencers” whose utterances and deeds, especially as they apply to the political realm, are regularly reported, repeated and discussed both in trade media and social media.

And yet, more than a third of Americans have never heard of Samantha Bee or Trevor Noah, or their shows, according to an illuminating new study.

This research comes courtesy of The Hollywood Reporter and the Washington-based research firm Morning Consult, which collaborated on a survey of 2,201 Americans earlier this month on the subject of our late-night TV shows and their political leanings. You can peruse the study’s results here.

Not surprisingly, the survey found that most Americans -- at least those surveyed for this study -- believe the late-night comedy shows lean leftward in their political viewpoints. Related to this, Republicans in the sample tended to decry the liberal slant of the late-night shows, while Democrats were in favor of it. No surprises there.

The “never heard of” data comes within the survey's questions, in which it tried to determine the favorability or unfavorability of the various talk show hosts and their shows.

For example, Jimmy Fallon of “The Tonight Show” on NBC scored a “very favorable” score of 29% and a “somewhat favorable” score of also 29% -- among the best favorability scores in the study. Only 5% of the respondents said they had never heard of him.

Fallon’s network television competitors also scored well in these categories -- at least in comparison to their cable counterparts. ABC’s Jimmy Kimmel scored 26% in the “very favorable” category and 30% “somewhat favorable.” Like Fallon, only 5% said they had never heard of Kimmel.

Late-night leader Stephen Colbert of CBS scored 23% “very favorable” and 21% “somewhat favorable,” with 13% saying they had never heard of him (somewhat surprising).

The news that these late-night personalities and their shows are virtual nonentities in the consciences and everyday lives of one-third or more of the nation stands in stark contrast to the way some popular media such as Web sites and print magazines hang on to their every word and share videos of their monologues and comedy bits.

Certainly, the audiences for these shows -- in the low millions if they are lucky -- would also indicate that most of America neither knows nor cares about them.

The same can be said for their counterparts who host the talk shows on the cable news channels. Compared to the national population, the audiences for these shows are miniscule. And yet, they sometimes seem as if they exert influence far in excess of their real circulation.

Perhaps this perception is simply dead wrong. Maybe the truth is that most people do not follow the constant debating and commenting on TV every day about what goes on in Washington. Maybe they simply have better things to do.

news, politics, tv
2 comments about "Who Are These People? A Third Of Americans Have No Idea".
Check to receive email when comments are posted.
Read more comments >
Next story loading