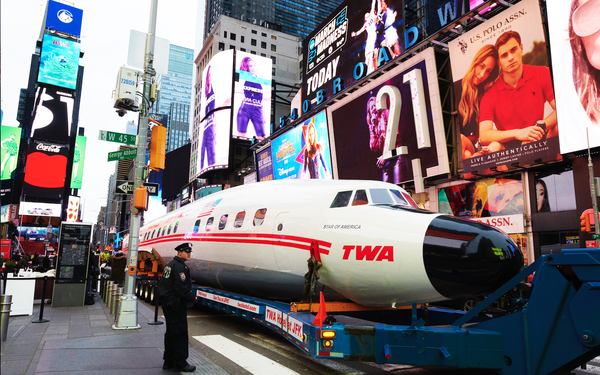 A historic TWA fuselage was transported to Times Square Friday to be filmed for a documentary.

The 1958 Lockheed Constellation “Connie” airplane will sit on a pedestrian plaza in Times Square March 23 and 24 before heading back to JFK, where it will become a cocktail lounge at the TWA Hotel, which opens May 15.

The plane is being filmed for the upcoming documentary "The Rebirth of the TWA Flight Center," which will chronicle the transformation of Finnish architect Eero Saarinen’s landmark 1962 TWA terminal into the 512-room TWA Hotel.

The documentary also traces the history of the building, which was designated a New York City landmark in 1994 and listed on the National and New York State Registers of Historic Places in 2005.

The TWA terminal was designed around the Lockheed Constellation Connie airplane. The Connie flew into JFK (then named Idlewild Airport) while it was in service as a TWA passenger plane.

The plane was so special to TWA that in 1955 the airline erected an eight-story billboard in Times Square with a two-fifths scale Connie model with a working propeller. The billboard had 20,000 lightbulbs and 50 miles of electrical wiring, for a total electrical load of a half-million watts.

The billboard came down in 1960 just as Connie was replaced with a jet that flew 300 MPH faster. It went on to serve as an Alaskan bush plane and a marijuana dropper before being rescued by MCR/Morse Development, which partnered with Atlantic Models/Gogo Aviation to restore it to original condition.

“Our Connie airplane is an important piece of New York’s rich aviation history,” states Tyler Morse, CEO and managing partner of MCR and Morse Development. “Partnering with the city of New York to bring Connie back to Times Square has been a dream of mine since 2016, when we began restoring the TWA terminal to its original 1962 condition.” 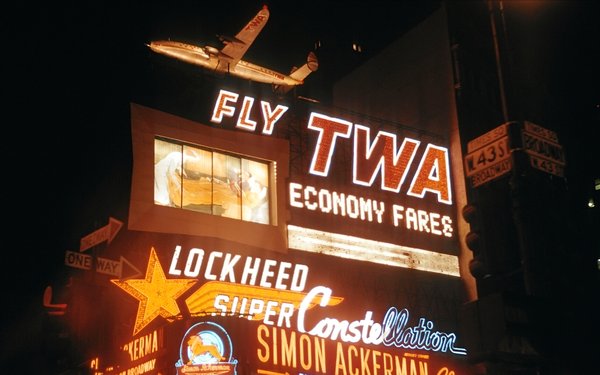 The Connie billboard lit up Times Square at Broadway and West 43 Street in 1959. Photo by Ken Peacock.