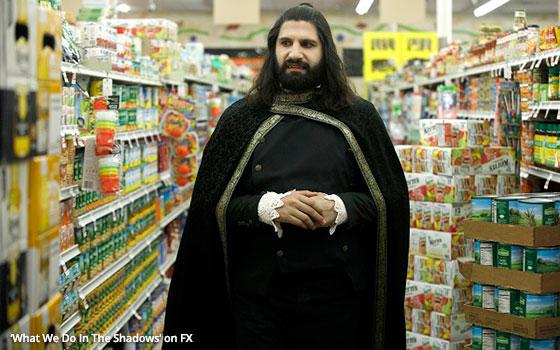 The eternity of life to which vampires are condemned approximates the experience of watching this new vampire comedy on FX. It makes 30 minutes seem like an eternity too.

Watching this new show, titled “What We Do In the Shadows,” has a way of sapping one's energy too. And that represents another coincidence, since one of the vampires in the show is known as an “energy vampire.” He is depicted as a person who is so dull he drains everybody of their energy (if not their will to live) -- both mortals and immortals alike.

This show reveals itself as so devoid of interest after just a few minutes that it raises a question that comes up more and more frequently in the current television era: Why on earth would anyone expend 30 minutes of their time to watch this thing?

If the current, overloaded era of media content has one central issue, it might be the battle for people's time. Thousands of other attractions are competing to displace “What We Do In the Shadows” in the half-hour a person must allot to watch a single episode of this show.

So many other choices of shows, along with online gaming that has seized the attention and time of tens of millions, are on menus available to so many today that TV shows must really be at the top of their own game if they are to gain any traction at all.

And yet, time and time again, we are confronted with new TV shows that fail to pass this time test. Sure, there will always be an audience of some sort for a vampire TV show, but this new comedy might even place that assumption in doubt.

“What We Do In the Shadows” is a single-camera comedy (shot documentary-style like “The Office” and “Modern Family”) about a group of vampire roommates living together in a rundown mansion in Staten Island.

In addition to “Dark Shadows” and “Modern Family,” you can add “The Munsters” to the list of shows whose titles may have been included in the elevator pitch for this show. Though few would associate the word “charm” with “The Munsters,” that silly ’60s show had more of it than this new one.

Like the family of Herman and Lily Munster, the vampires in “What We Do In the Shadows” are the proverbial fishes out of water in their Staten Island neighborhood. This scenario might have worked better if the makers of this show had simply decided to make this a standard three-camera comedy with a laugh track instead of a docu-style one.

But then, FX might never have bought into this idea. So we are left with a docu-style comedy that might possibly be the most dreary such comedy ever produced for television.

These one-camera comedies all come with the assumption that their subject matter is interesting enough to sustain itself in an ongoing, serialized documentary treatment.

The lives of these Staten Island vampires just don't cut it, however. This show plays like an idea for a comedy sketch of three or four minutes that is now to be stretched into multiple 30-minute episodes.

For vampires and mortals alike, this presents a whole new definition of the word “eternity.”