White House Provides Enemies List To, Well, 'The Enemy Of The People' 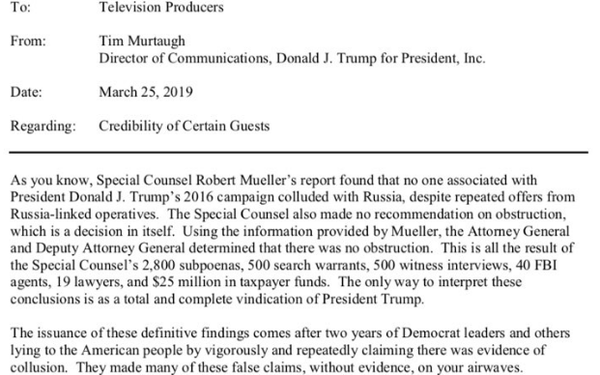 He began his first full day in office by declaring war on the media, and now the President is circulating an "enemies list" asking "the enemy of the people" to bar his most vociferous political opponents from speaking on their airwaves.

The memo cites Attorney General William Barr's initial sum-up of the Special Counsel's investigation of the President's campaign ties to Russia as proof that his enemies -- who mostly are members of Congress responsible for providing oversight of the President -- lied to the American people and that if they do appear on their news programs, the producers "should replay the prior statements and challenge them to provide the evidence which promoted them to make the wild claims in the first place."

My first reaction was that this felt like it was part of a prepared campaign strategy to seize on the White House's spin that Barr's summation is the final word, and in the words of the President himself, a "complete and total exoneration," even though Barr's summary included a statement from Special Counsel Robert Mueller saying explicitly that the investigation "does not exonerate him."

In other words, the President entered the post-Barr part of his term the way he began the first part: by lying.

My second reaction is that the reelection campaign's request to blacklist the President's political opponents is part of a much bigger disinformation campaign that may be the envy of the counter intelligence community.

Time will tell what the Special Counsel's investigation actually found, not what the President's hand-picked Attorney General asserts, but the tactics being employed by the White House and the reelection campaign are straight out of the GRU. Trump's campaign may not have actively colluded with Russia, but it's reelection campaign, at least, has studied Russia's tradecraft well, especially its use of so-called "active measures" to attack political opponents by sowing disinformation that creates division within society.

What surprises me most isn't that the White House would try to spin Barr's spin, it is the brazen and outlandish way they are doing it. It's more than a war on media. It's more like a war on reality, even if the media are the conduit for it.

"The bottom line is that Donald Trump would love to run against the news media," Washington Post Associate Editor David Ignatius observed on MSNBC's "Morning Joe" Tuesday morning, adding, "We are his favorite target. And in some ways, we are his most successful target. Beating us up, seems to work. We have a lot of enemies out there.”

"It's branding for him," added "Morning Joe" co-anchor Mika Brzezinski.

"I just think we need to avoid taking the bait," Ignatius added, suggesting, "There are so many important issues facing the country. He’s going to want to make this a daily circus about how terrible the press is.”

The Trump campaign is sending this memo to TV producers: pic.twitter.com/yhr03LAI7N

11 comments about "White House Provides Enemies List To, Well, 'The Enemy Of The People'".
Check to receive email when comments are posted.
Read more comments >
Next story loading