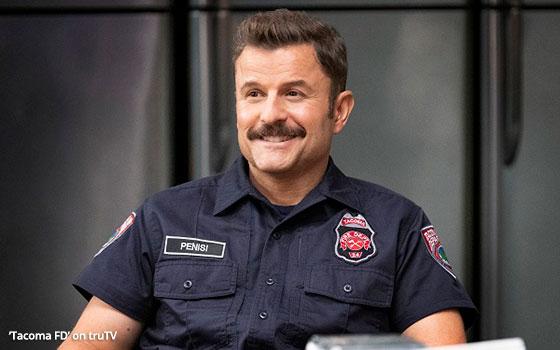 At first glance, truTV's new series “Tacoma FD” might seem like it is a comedy about a fictionalized city fire department.

And for the most part, that is true. But at second glance, the show emerges as a sitcom about urinating. Yes, you read that correctly. This bodily function takes center stage in the first and second episodes of this show, which premieres Thursday night.

Will the brave firefighters and first responders in “Tacoma FD” be seen urinating in Episode 3? Unfortunately, the always deadline-sensitive TV Blog did not have time to watch Episode 3, even though it was graciously provided by truTV for a preview.

But Episodes one and two were more than enough. In the first one, the guys engage in a good-natured, but oh-so manly competition to see who can fill a five-gallon water cooler jug with the most liquid waste.

And in Episode Two, the fire chief makes a contribution to his department's ongoing feud with the Tacoma police by urinating in the police chief's office fish tank.

The TV Blog believes that these characterizations of the personnel comprising Tacoma's bravest and finest are wholly comedic, fictional and inaccurate.

This comedy plays as if it is aimed at a teenage audience. And not older teens either. On the contrary, this comedy seems to have been created by and for 14-year-old boys. If this is insulting to any 14-year-old boys who might be reading this, then the TV Blog apologizes.

The thing is, up until the epic urination contest in the first episode, “Tacoma FD” seemed like the kind of comedy series that a network would be proud to have. The characters were likable and the situations they were in -- such as one of their emergency calls in which the guys had to rescue an alpaca that was stranded on top of a piece of backyard playground equipment -- were reasonably inventive.

Then the episode reaches the urination contest portion and you sit there asking yourself questions for which there are no rational answers -- such as: What did truTV see in this show that someone over there said yes to it? And: Did the producers successfully keep this show's recurring urination theme under wraps or otherwise hidden from truTV's programming execs (if there are any)?

Of course, resorting to humor befitting a young teen is nothing new for TV comedies in general. Usually, this material takes the form of frequent references to genitalia, both male and female.

In “Tacoma FD,” this requirement is fulfilled by the name of one of the fire department characters -- Penisi -- seen with his name tag prominently displayed in the photo above.

This too may have eluded the execs (if any) who were assigned to oversee the production of this comedy series (or at least check in with it every once in a while).

Maybe this kind of immature comedy is resulting today from another trend that is moving swiftly and growing across the land -- the spreading legalization of marijuana. The TV Blog has no personal experience in this area from which to draw, but from what we have heard from others, some forms of comedy come across as much funnier when one is under the influence.

With that in mind, maybe in the final analysis, truTV might be on to something.