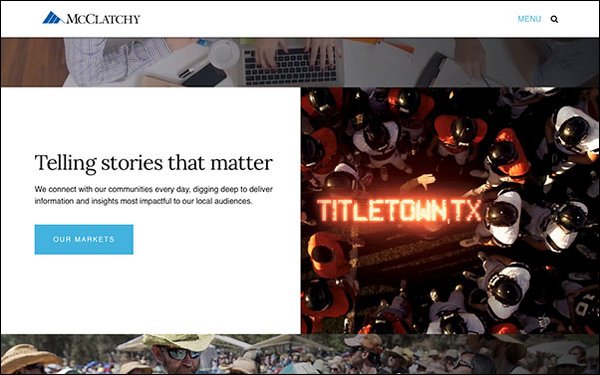 It's no secret local news is in bad shape. Today, The Pew Research Center released a report stating that while 71% of those surveyed believe their local news outlets were doing fine financially, only 14% had paid for access to local news coverage in the past year.

Earlier this month, Facebook reported it couldn’t find enough local news to fill its dedicated platform called “Today In.” One in three of its users reside in a news desert, with little or no local reporting to inform the community. Facebook’s contribution to these news deserts can’t be overlooked, and neither can Google’s.

However, each has launched projects over the past couple of years hoping to repair the lack of local coverage. Facebook's most recent effort is The Facebook Journalism Project, and now Google debuts its Local Experiments Project.

In an exclusive with Axios, Google announced its Local Experiments Project is an attempt to fund local news websites across the country with the intention of going global.

The sites, which will number in the dozens, will be editorially independent from Google and will be built by selected partners, the first of which will be McClatchy.

Richard Gingras, vice president of news at Google, told Axios: "Everything we do in this space tends to be open-sourced learnings. Our business models are not attached to these efforts. There's no requirement in any of these experiments that the partners use Google advertising tools."

Axios reports the partnership between Google and McClatchy, dubbed “The Compass Experiment,” will result in the launch of three digital-only news operations focused on local coverage and executed across multiple platforms. Google chose McClatchy, in part, because of an already existing relationship.

Following the completion of the project, McClatchy will maintain ownership of the sites, which will be funded with millions of dollars from Google. The funding for this project will come from the money invested in the Google News Initiative, launched a year ago, which pledged $300 million over three years targeted at supporting “news media transition to digital.”

To boost those locations hardest hit by lack of news coverage, McClatchy’s focus will be on three cities that have less than half a million residents.

At this time, no plans for new hires across these locations has been announced, though sources tell Axios the plan is to eventually have people embedded in each.

At the experiment’s completion, Google will use the lessons gleaned from McClatchy’s work to “create a network of shared insights” available to those across the local news world.

McClatchy CEO Craig Forman stated the alliance let the company move "beyond some of the incrementalism" that defines the daily job but "can hold us back from pursuing things related to a long-term vision."