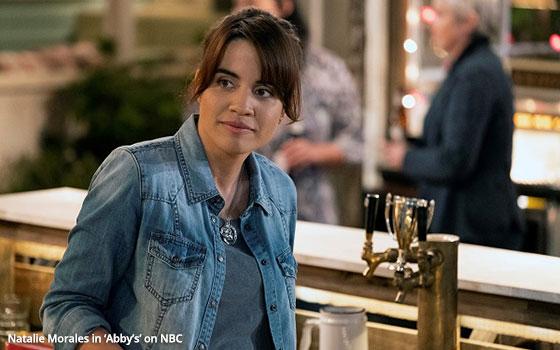 Drunkenness as the basis for comedy would seem to have gone the way of the dodo.

In our enlightened age, we are a long way from Otis the lovable town drunk in “The Andy Griffith Show,” Dean Martin on his 1960s variety show playing (or perhaps not playing) at being tipsy, the comedian Foster Brooks and his “funny drunk-guy” routine or Dudley Moore starring as a drunk in “Arthur” (1981).

And yet, here we are again as NBC introduces a new prime-time barroom comedy in which the excessive consumption of alcohol as a means of self-medicating and forgetting takes center stage.

The show, titled “Abby's,” looks like an attempt to revive the “Cheers” formula for 2019. The Abby of the title is this bar's proprietress, an Afghan War vet and proud bisexual. How's that for a modern-day update? Abby is played by Natalie Morales (pictured above).

In the first two episodes of “Abby’s” previewed by the TV Blog, no one becomes fall-down drunk in the show. But the prodigious consumption of alcohol is celebrated throughout.

So is the lawlessness of this particular establishment, which is not a licensed bar at all, but a creation of this Abby&'s imagination and energy. She has created this bar in the backyard of a house she is renting in San Diego, seemingly taking advantage of an elderly landlady who apparently did not know about it.

As the show gets under way, however, this landlady has died and a nephew has inherited the property. When he shows up to question the legality of this establishment, and to point out that as owner of the property, the responsibility for what happens there is all his in the eyes of the law, he is portrayed as a buzz-killing loser.

It is not a spoiler to report here that this new landlord becomes won over to the concept of an illegal speakeasy operating in his backyard in the space of a few minutes of sitcom time. This was predictable because if he did not approve of Abby's, then there would be no show.

Abby, of course, accuses this man of hassling her, when he has every right to shut down this saloon which could get him arrested by authorities and/or sued by neighbors or the city government.

Viewers are supposed to side with Abby, but that is difficult to do when she is shown to be blatantly operating an illegal backyard bar and, in so doing, positioning herself defiantly as a neighborhood nuisance who feels entitled to break the law.

Then there is the implication that she did this knowing it was illegal and depending upon her elderly landlady remaining oblivious because she is (or was), you know, old.

Like “Cheers,” the illegal backyard tavern called Abby's is populated by picaresque types. Most notably, Neil Flynn plays a skinny Norm. Flynn was most recently seen in “The Middle,” which was one of the best network comedies of the past 10 years. Here, he sits at a bar for 30 minutes.

A big difference between “Abby's” and “Cheers” is that the “Cheers” bar was a legally licensed establishment. Positioning Abby&'s as some sort of pop-up bar that deserves to exist simply because it fulfills this woman's dreams is a totally modern construct that would have been unthinkable in the 1980s and '90s.

Perhaps in future episodes of “Abby's,” the writers will sensibly steer her toward purchasing a real bar, where she can join the ranks of the law-abiding. The fact is, this backyard-bar gimmick adds nothing to the show at all. It makes you wonder: Why didn't they just make Abby's a regular bar in the first place?