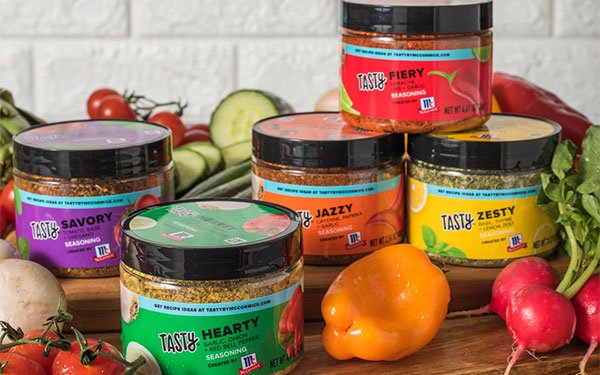 BuzzFeed has an addition to its line of licensed products. It is diversifying its revenue to supplement its ad business, a focus of the company since the end of 2017.

BuzzFeed has partnered with spice company McCormick to develop a seasonings line branded with BuzzFeed’s recipe and cooking vertical Tasty.

For McCormick, a longtime Tasty partner, this new deal is an opportunity to reach millennials and access BuzzFeed's data on their cooking and shopping trends and behavior.

The co-developed line of seasonings, called Tasty Seasoning Blends, launches in five flavors: Fiery, Zesty, Savory, Jazzy and Hearty. The full kit with all five pucks is available for purhcase in the U.S., U.K., and Canada; it runs $29.99 for the set in the U.S.

Individual spice pouches and pucks will go on sale for $1.99 each at U.S. retailers nationwide (and Canada) starting June 2019, and in the U.K. next year.

McCormick used BuzzFeed’s data on recipes and flavors favored by millennials to develop the spice blends, according to an AdExchanger reported.

McCormick and BuzzFeed will advertise the spice blends with sponsored posts on Facebook, Instagram, YouTube and newsletters, as well as use the spices in Tasty video

Two years ago, BuzzFeed CEO Jonah Peretti said he would reorganize the media company's ad sales department and focus on its lifestyle and service-journalism brands and evolve them into multiple revenue stream opportunities.

Peretti called this "pursuing the Tasty model of success across our business.”

At the end of last year, Peretti revealed Chief Commerce Officer Ben Kaufman and his 65-person team generated $50 million in revenue by successfully combining commerce and advertising. About of one-quarter of that comes from Tasty products.