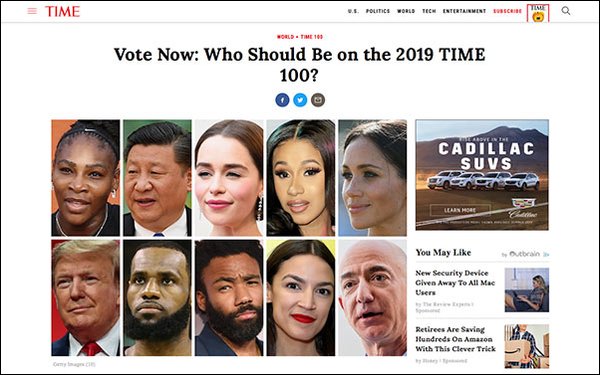 Time is expanding its annual "Time 100" franchise — a list of the 100 most influential people in the world — to a daylong summit held in New York City.

Time 100, which is in its 16th year, holds an annual gala to bring those on the list together; it also hosts other live events around the franchise. Last year, Time partnered with WeWork to host a series of fireside chats with Time 100 alumni at WeWork spaces around the country.

This will be the first Time 100 summit, which will precede the gala on April 23 at Center415 in NYC.

“The Time 100 is more than a list of the world’s most influential people. It is one of the world’s greatest leadership communities,” Dan Macsai, editorial director of the Time 100, told Publishers Daily. “Now that the TIME 100 is in its 16th year, with more than 1,000 alumni, Time has a unique opportunity to convene these individuals like never before.”

The daylong event will bring together leaders from past and present Time 100 lists across a range of sectors, including government, business, entertainment, health and science, as well as philanthropists, civic leaders and next-generation leaders, Macsai said.

Edward Felsenthal, editor-in-chief and CEO of Time, told Publishers Daily the summit represents the media company’s greater focus on its events business as a revenue stream.

“The Time 100 is a globally recognized franchise with extraordinary convening power, and we see expanding it as one of the biggest opportunities for our new company,” he said. “This is a major step in Time’s new chapter, and you can expect to see more events and extensions of existing franchises, along with exciting new ones, from us going forward.”

Additional speakers will be announced on April 18, when the new Time 100 list is revealed.

The audience at the Time 100 Summit will include students and leaders from local colleges and universities, Macsai said, as well as members of the World Economic Forum’s Young Global Leaders program.

“Our goal is to bring together people who hope to change the world with those who are already changing it,” he said.

Cadillac and Citi are the sponsors of the summit.