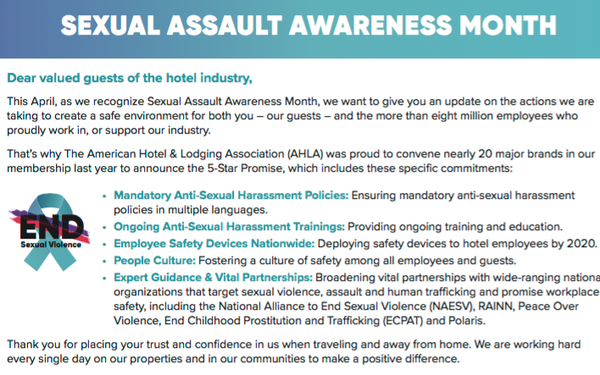 The American Hotel and Lodging Association is launching a month-long campaign timed to coincide with Sexual Assault Awareness Month. It launched with a full-page ad in The Wall Street Journalnoting the AHLA's commitment to raising awareness of sexual violence and providing hotel operators with new trainings and resources to educate employees about identifying and reporting sexual harassment and assault.

AHLA’s 2019 Board of Directors also dressed in jeans on April 2 at its board meeting to launch a social media campaign culminating in AHLA’s sponsorship of Peace Over Violence’s Denim Day on April 24. AHLA’s donation will allow Peace Over Violence to continue to lead a violence prevention campaign throughout the Los Angeles metro area.

AHLA has provided all its members with a Sexual Assault Awareness Month toolkit that includes such collateral as educational table tents for member properties and pins to be worn throughout the month.

“Safety is a never-ending challenge, and the hotel and lodging industry is committed to working with safety experts to continuously update protocols and procedures to better address the needs of employees, while also ensuring a safe environment for workers and guests,” states Chip Rogers, president and CEO, American Hotel & Lodging Association.