'Game Of Thrones' Is Last Of The TV Blockbusters 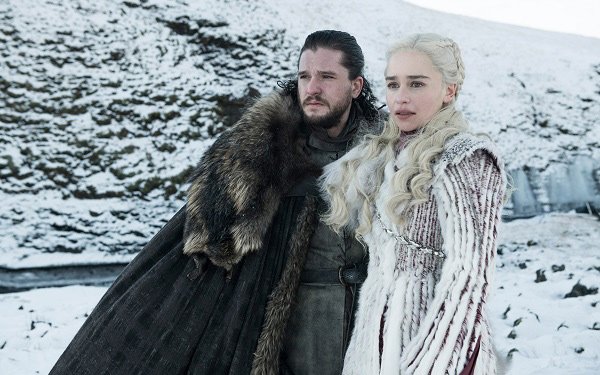 As “Game of Thrones” fire-breathes its last starting this Sunday, this over-the-top, hugely expensive TV series has taken on an old-Hollywood feel.

With its cast of thousands (either in actual fact or created with special-effects technology), epic stories and clashing armies, “Game of Thrones” might have been something Cecil B. DeMille would have directed if he had lived long enough to be employed by HBO.

From a TV standpoint, the cost of producing “Game of Thrones” was preposterous. The final six episodes, which start Sunday, reportedly cost $15 million apiece and might, in fact, have cost even more, according to various stories.

Presumably, the powers-that-be at HBO and its now-former owner, the old Time Warner, crunched the numbers sufficiently to project a profitable future for “GOT.” It will play forever, of course, in the streaming universe and, the TV Blog assumes, will generate income accordingly.

Still, there is something brave about going out on the proverbial limb to pay for and produce such a thing. It does remind one of old Hollywood -- at least the mythical one -- in which swashbuckling (and, seemingly, half-crazed) producers and directors defied their money men by running up the cost of production in order to create blockbuster entertainments, some of which failed and others that became huge successes.

The question is: Will anyone ever attempt anything like “Game of Thrones” ever again? Certainly, “ever” is a pretty long time. But in the foreseeable future the prospect feels doubtful.

The era in HBO history that you might say began with “The Sopranos” in 1999 can also be seen as coming to an end with this final run of new “Game of Thrones” episodes. HBO is now owned by AT&T and some members of the management team who were on hand for the last 20 years of HBO greatness have drifted off.

“Game of Thrones” came out of an HBO that feels quite different today than when “GOT” premiered in 2011 -- just eight years ago, but in TV years, it feels like a lifetime.

If HBO’s current output is any guide -- along with the output coming from the industry’s most prolific producer of original content for the small (and sometimes big) screen, Netflix -- then the current vogue in small-screen entertainment seems to be more about character-driven dramas and stories that are more intimate.

They are the opposite of an epic saga such as “Game of Thrones,” which you might say was preceded on HBO by the pay-cable channel's first such epic, “Rome,” which lasted two seasons in 2005-07.

That one was not nearly the phenomenon that “GOT” turned out to be, but it too had the feel of a DeMille spectacular. Today, though, the leading dramas on HBO are decidedly smaller -- “Big Little Lies,” “Divorce” and “My Brilliant Friend,” to name a few.

They are good shows, all reasonably well-regarded. But none of them will ever be confused with “Game of Thrones.”

Netflix too -- with all of its ongoing production -- does not tend toward “Game of Thrones”-like epics even if it could certainly afford to do so (at least on the basis of the scads of money this company reportedly has on hand to pour into production).

But producing a show as far-out as “Game of Thrones” takes more than just money. It takes a kind of moxie, if not hubris, to assume the great risks involved and gamble so much of the company's money on a slim hope that a show will become a hit. And that is never a certainty, no matter what the show.

Now it is time to say good-bye to “Game of Thrones.” It just might be the last of its kind that we will see in quite a while, if ever.

The final season of “Game of Thrones” starts Sunday (April 14) at 9 p.m. Eastern on HBO.

tv
1 comment about "'Game Of Thrones' Is Last Of The TV Blockbusters".
Check to receive email when comments are posted.
Next story loading