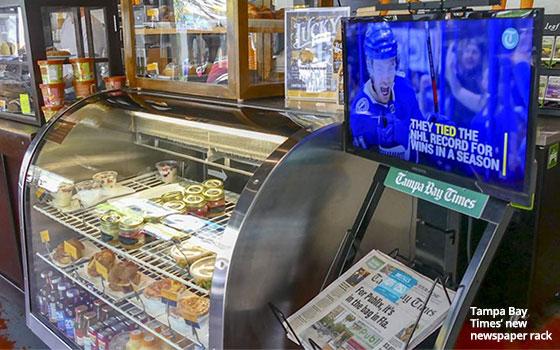 Newspaper racks for Florida’s daily Tampa Bay Times are getting an update: 24-inch video monitors that stream news and advertising spots, as part of a project called TimesVision to bring video content to print distribution racks.

Tampa Bay Times claims it is the first newsroom in Florida to put these monitors in retail outlets.

Roughly 53 select retail locations around Tampa Bay will get these new racks, according to a Tampa Bay Times report. The screens are on display at convenience stores and gas stations, like Shell and Rally, as well as coffee shops.

The monitors play a seven-minute loop of news and information, including daily weather reports and quizzes on current events. Tampa Bay Times can also update the streaming video with breaking news in real-time.

A team of the newspaper's journalists, led by staff writer Joshua Gillin, produce short videos to display on the TimesVision monitors.

“This is a prime example of the Tampa Bay Times putting resources into trying to reach and serve its audience in innovative, new ways,” Gillin stated, per the Tampa Bay Times report. “It's demonstrating a commitment to providing information to our readers in a fashion we would have never considered even five years ago.”

The video will be broken up by advertising and in-store promotions.

“Our aim is to have hundreds of stores participating in the next few years throughout the Tampa Bay market,” stated Conan Gallaty, the newspaper's executive vice president-Chief Digital Officer. “TimesVision promotes the stores that sell newspapers, so there’s a great benefit to our retailers.”

The monitors are built with optical sensors that can detect when someone approaches the screen. It can track the length of time someone watches the videos, as well as estimate gender, age and facial expression. Data gathered by the sensors can tell partners how audiences are engaging with their ads. (The sensors do not capture photos or video, to protect audiences’ privacy.)

According to the newspaper's information to advertisers on its website, the daily print product has a circulation of 205,201, with 896,700 Sunday readers. Its site reaches over 4.3 monthly unique visitors.
advertising, distribution, newspapers, video
Next story loading