'Game Of Thrones' Ratings Were Respectable, But Not Epic 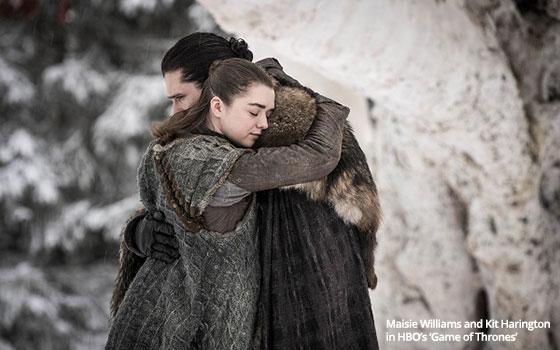 We live in interesting TV times when a hit show's audience amounts to 17.4 million viewers, and this number is considered a blockbuster.

This is not meant to take away or otherwise undermine HBO's joy over the audience it tallied for the eighth-season premiere of “Game of Thrones” this past Sunday.

If 17.4 million viewers is now to be a benchmark for blockbuster audiences, then so be it. It is just that not that long ago a TV series with the status, anticipation, notoriety and excitement of a “Game of Thrones” might conceivably have drawn far more viewers on Night One of its final season, which in this case will run for only six episodes.

In addition, there is reason to be optimistic that the show will add substantially to its viewership in the days, weeks and months to come, suggests a press release issued Monday by HBO about the Sunday night ratings.

The release said the “GOT” final-season premiere “was watched by a record 17.4 million viewers Sunday night across HBO's platforms (linear, HBOGO and HBO NOW), exceeding the previous series high of 16.9 million viewers for the season seven finale.”

“Compared to the season seven premiere audience of 16.1 million, the season eight premiere grew by [more than] a million viewers,” the release said.

When I first heard the reports tucked into various TV newscasts on Monday about these figures, my first reaction was: Is that all? “Only” 17.4 million? Judging by all the hype that HBO seemed to generate so successfully in the weeks leading up to the season premiere, I guess I expected the audience to be much bigger.

By all appearances, this pending premiere had all the makings of “event television” -- something “everyone” would watch. But apparently, not “everyone” was interested.

However, the good news for “Game of Thrones” is that HBO has every reason to expect the audiences for each of these new episodes to effectively double in time. That's what happened in season seven, according to HBO's press release.

“ ‘Game of Thrones’ seventh season went on to average 32.8 million viewers per episode” following its linear premiere, HBO said. “That viewership will grow considerably over the run of season eight.”

There is little reason to doubt that “Game of Thrones” will continue to compile viewership throughout its streaming life, which will likely continue long after the introduction of new episodes has run its course.

Still, for a show that gets so widely discussed as soon as its new episodes premiere, fans or even casual viewers who wait until sometime later to play catch-up certainly risk exposure to various spoilers embedded in the tweets and other social-media comments that this show generates.

HBO reported in its ratings release that the “GOT” season premiere was the “most-tweeted” episode in the show’s history -- garnering more than 5 million tweets. Perhaps to avoid spoilers, some good advice might be: Avoid Twitter.

As for the episode itself, the high point for the TV Blog was the fanciful flight of the dragons undertaken through wintry peaks and valleys by Daenerys Tagaryen (Emilia Clarke) and the aptly named Jon Snow (Kit Harington). That was something you don’t see every day.

tv
3 comments about "'Game Of Thrones' Ratings Were Respectable, But Not Epic".
Check to receive email when comments are posted.
Read more comments >
Next story loading