Influence And Superpower: The Prime Of Miss Gayle King 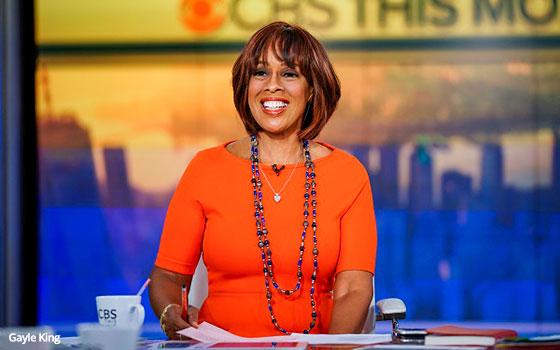 Gayle King gives hope to all of us around the age of 60 who might be feeling that our best days are behind us.

But here she is, earning accolades and a hefty new network TV contract at the age of 64.

The latest news on the prime of Miss Gayle King came via email on Wednesday when CBS ballyhooed the news that Time magazine has included King in its annual “Time 100” list of the world's most influential people.

Yes, you read that correctly: Out of a global population estimated at 7,346,235,000 people, the no doubt overworked staff of the Time magazine influence department winnowed this population down to 100 who stand out as more influential than any of the remaining 7,346,234,900 souls residing on the planet Earth.

And Gayle King, co-host of “CBS This Morning,” is one of them. Note: Not on the list -- Time magazine.

King made the list by virtue of her “greatness” as a TV interviewer, according to the announcement from CBS that quoted from a tribute written for the “Time 100” issue by guest tribute-writer Ava DuVernay, a noted (if not influential) movie director.

Wrote she, according to CBS: King is “one of the all-time great broadcast interviewers. What most don’t understand about Gayle is that this perfected proximity to others is a superpower that the best journalists possess. To be present, but not centered. To observe. To bear witness. Gayle has long honed this craft.”

If I may take a crack at this piece of writing for a brief moment, I think this “superpower” thesis bears witness to the writer not knowing how morning shows work.

With all due respect to Gayle King, who is doing a fine job of interviewing people and co-hosting this jolly morning news show, her “proximity” to these others is not a “superpower.” Rather, it is merely a function of a publicity apparatus that ensures that newsmakers and other celebrities get booked on morning TV shows that have two hours of airtime to fill each day and are in constant need of material.

At around the same time as the R. Kelly interview, King was apparently up for a contract renewal (or extension), and this interview may have boosted her prospects (and possibly her influence) at CBS. Ever since, reports have appeared indicating that her new deal will be worth far north of the $5.5 million she is now reportedly making annually.

These recent milestones in her life and career are great for Gayle King, but they hardly make her “influential.” Or at the very least, I have never met anyone who has been influenced by her.

Mind you, I do not see the prospect of coming under the influence of Gayle King to be necessarily a bad thing. My very limited experience with Gayle King -- that is, meeting her a few times -- left me with the impression that she is a very nice lady. I liked her a lot but did not feel influenced by her.

What’s with this “influential” list, anyway? “Time’s annual list of the world’s most influential people is a designation of individuals whose time, in our estimation, is now,” says Time editor-in-chief Ed Felsenthal in a prepared statement in the CBS press release. “The ‘Time 100’ isn’t a measure of power, although many on the list wield it. Nor is it a collection of milestones accumulated. As our staff considers candidates, we often find ourselves wowed by those with stunning lifetime achievements.”

In the final analysis, this is a problem for me -- journalists being “wowed.” That's a word one might associate more closely with a child watching an acrobat at a circus, perhaps for the first time. But not a journalist.

Journalists are not supposed to be “wowed.” They are supposed to be skeptical about their world and the people in it. I have covered the TV business as a journalist for 36 years this coming July, and I am not wowed by anyone in that business and never have been. And though I do like some of them (at least a little), I have so far avoided falling under the influence of any of them.