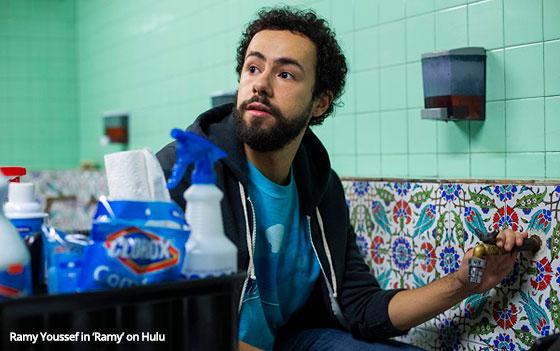 Ramy Youssef is the show's star and titular namesake. He is a 28 year-old standup comedian who has apparently long taken up the subject of growing up Muslim in America in his standup performances.

So this new TV comedy is not unlike a slew of others that have come and gone for years centered on comedians and their lives as reflected in the semi-autobiographical material they have become known for.

Except for the fact that he is Muslim, “Ramy” is descended from “Roseanne,” “Seinfeld,” “Home Improvement” (Tim Allen), “Everybody Loves Raymond” (Ray Romano) and others.

Of course, in the scheme of things, the fact that Youssef -- an Egyptian American -- is a Muslim would serve to set him apart from his predecessors, particularly since he deals with issues and situations in his sitcom that are unique to his community and its religion.

And it goes without saying that the Muslim community does not generally turn up as the subject for TV comedies. With that in mind, “Ramy” might draw an audience primarily from that community, although conservative members of the community might balk at the show's depiction of Muslim rituals, and also its candid discussions about sex.

Clearly, Youssef aspires to be a voice for his generation of Muslim Americans. As one who is not a member of that group, a TV critic faces a challenge in judging the relative qualities of a show like “Ramy.”

With no familiarity about the ways of the Muslim American community, a non-Muslim would seem to stand at a disadvantage with it comes to getting the joke. On the other hand, some of what the Ramy character encounters in his family and social life will resonate with just about anyone.

In the end, the Muslim American community in the New Jersey depicted in “Ramy” is not all that exotic. We are their neighbors, and they are ours.