Nissan's New Marketing VP Gets Candid At 'Circle Of Women' 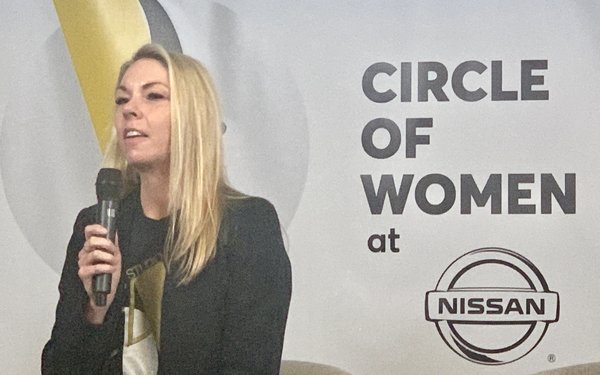 Allyson Witherspoon, Nissan North America’s newly installed vice president, marketing communications and media, called out the gender stereotypes that have long been a part of the world of automotive advertising.

“It's not relevant anymore,” she said.“It’s misogynistic and it's insulting.”

Witherspoon was part of a panel discussion at TBWA\Chiat\Day New York last week during the New York International Auto Show. The agency held the event as part of its Circle of Women leadership development program, which was expanded recently to include clients, with Nissan as the first corporate partner.

The headliner was the 3% Movement’s Kat Gordon, who was electrifying in her call for equal pay and more women in leadership positions at agencies. But hearing Witherspoon offer her frank assessment of what it’s like to be a powerful woman in two male-dominated industries — automotive and marketing — kept the standing-room-only audience captivated.

Witherspoon applauded the men in attendance.

"I think right now, men don't know what they don't know. And actually that's not just a gender thing, we all kind of go through that,” she said.

Witherspoon did not grow up thinking being a gearhead was just for boys. She has been into cars since she was an 8-year-old counting Porsche 911 headlights from the backseat of her parents’ car. She credits her dad as being an early mentor.

“I’m a twin, I have a twin brother, and my dad never differentiated between us as far as who could succeed or putting us into gender roles,” she said. “He always supported us doing whatever we wanted to do.”

She also credited Lori Senecal, former global CEO, Crispin Porter + Bogusky, as being the first female leader who taught her how to work in a very male-dominated profession when they worked together on the BMW account at a previous agency.

A piece of advice she was given early in her career that she still follows today is, “call BS early and often. You know what’s right and wrong. Don’t concede. We all have to push. And once you start getting into higher-level positions, bring people along with you.”

Prior to the event, TBWA fielded an anonymous survey to women working on Nissan marketing across TBWA, Nissan and all Nissan United agencies. Sixty-eight percent of women said they see women colleagues or clients look out for each other in the workplace. Sixty-five percent of women say three or more women at work have their back and are looking out for them, and 65% of women have a mentor they can confide in or go to for advice.

The study findings will help to inform the Circle of Women program content, working to reinforce and amplify positive behaviors such as women looking out for other women in the workplace, while identifying and addressing the challenges they face.

Later this year, TBWA will host bespoke events for participating clients programmed to address the top priorities and needs within their organizations. Other TBWA clients will be invited to the event in an effort to unlock cross-company networking and mentorship opportunities.

Nissan recognizes the value of identifying talented individuals and ensuring they have the right support and opportunities to grow into leadership roles, said Anne McGraw, Nissan senior marketing manager and the champion of the Circle of Women at Nissan. She talked about her years in the auto industry and on the agency side where she was often the only woman.

“I have spent a long time trying to blend into the room and not have anyone pay attention to the fact that I’m different,” she said. “It’s taken me a long time to have the courage to understand that actually the different opinions I have are why I should be in the room, and why I should be at the table and in those meetings and speak up and embrace that -- and that it actually has business value.”

Brava, Allyson and Anne. Women auto journalists are also in the minority and face many of the same obstacles you both described. It's time we all call BS.