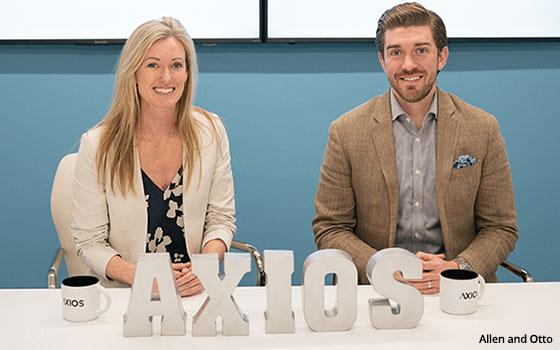 has tapped Emily Allen to lead Axios Studios, the branded content arm of the politics, business and techsite, in the newly created position of senior vice president, branded studios.

The role is part of a larger expansion of Axios’ brand studio. This year, the company plans to increase the team from 10 to 16 staffers.

In 2018, Axios made $25 million in advertising revenue and nearly reached profitability, working with clients like Boeing.

Allen and Otto began working in their new roles yesterday.

“We are excited to build out our New York revenue team with two innovative individuals to meet the needs of our client’s corporate social responsibility messaging,” stated Axios cofounder-president Roy Schwartz.

Otto comes from Politico’s audience solutions team, where he was executive director.

Axios has rapidly expanded since its launch in 2017, with nearly 20 newsletters, over 150 employees and 75 events, as well as a podcast and upcoming HBO show.