Presented For Your Entertainment: Chicago Violence On CBS 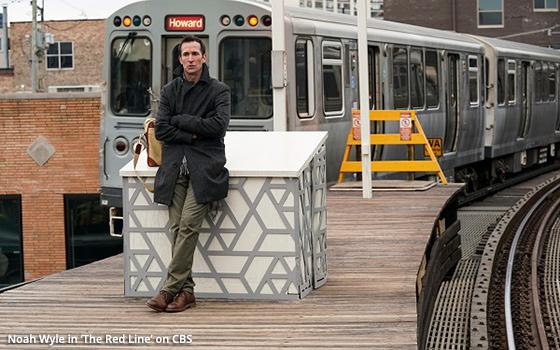 For evidence that prime-time TV is in the midst of a particularly joyless period in its history, Exhibit A is this new “limited” series premiering this weekend on CBS.

Watching the first two episodes of this eight-episode series (both of which are scheduled to air back-to-back Sunday night) was about as entertaining as attending a funeral.

This show, titled “The Red Line,” is a sad story about people in Chicago in the aftermath of the fatal shooting of an innocent African-American doctor who a white Chicago policeman mistook for a perp who had just held up a convenience store.

The doctor was wearing a hoodie and his back was toward the officer. So the cop thought the robbery was still in progress and he blasted the doctor in the back, killing him.

So now, as if problems related to police violence in Chicago were not serious enough in the real world, along comes this unnecessary and exploitative series about a fictionalized incident inspired by real-life events both in Chicago and elsewhere.

It should come as no surprise to anyone that this series adds nothing to the debate. It exists merely to entertain -- which is no small task when dealing with such dreary and violent subject matter.

The shooting of the doctor, who is merely an innocent bystander who stopped in to this store to buy a gallon of milk on his way home, is particularly violent and grotesque.

Certainly, the TV Blog is well-aware that such scenes are commonplace on TV today -- so much so that audiences have become anesthetized to them. Still, this one came across as especially jarring and upsetting.

The title of the show, “The Red Line,” apparently refers to one of the train lines in Chicago's elevated (and also partially submerged) transit system. It may have this title because the various people involved in its story -- from the surviving family members of this African-American doctor, to the officer who shot him -- may all live along this same train line. Or maybe not. The first two episodes, which the TV Blog previewed, do not make this clear.

The storytelling throughout the two episodes has a similarly muddled quality. One subplot has to do with an ambitious African-American woman who is running for an alderman’s position occupied by a long-time African-American insider (played by Glynn Turman) who has ruled his ward for decades.

He represents the past, and everyone else in the show seemingly represents the present and future, starting with the deceased doctor who was a gay man married to a schoolteacher played by Noah Wyle.

They have a teenage daughter who they adopted as a baby. She is African American and her best friend at school is transgender. In the wake of her other father's murder, the daughter seeks to find the birth mother who gave her up for adoption. The problem is: Unbeknownst to her, her mother is the woman running for alderman, who doesn't want this child turning up during her campaign.

So many stories and so little time -- such are the limitations of TV's current love affair with “limited “series, although in this case, this show's “limit” of eight episodes is a blessing because it will come and go quickly.

In reference to this show and so many others that turn up nowadays all over TV, the “limited” descriptor in the show’s positioning is intended to imbue this show with special significance or importance -- like the “very special episode” descriptions of various network sitcoms from days of yore.

Unfortunately, there is nothing special about “The Red Line” that anyone has not seen before. Nor should anybody want to.

Once upon a time, watching TV was actually fun. Increasingly today, this is not the case. As noted many times here, TV comedies today contain no laughs, and the dramas are unrelievedly sad. Today, everything -- comedy and drama -- has to be about something.

It doesn't seem that long ago that the top-rated TV comedy in America was a show about nothing. But it was a long time ago -- 21 years since “Seinfeld” had its finale -- and today, joy on TV is in short supply.