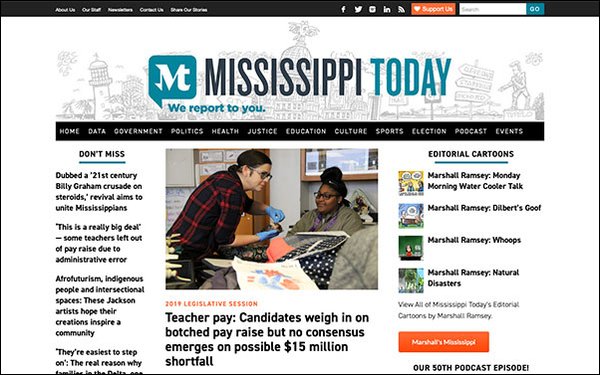 NBC News chairman Andy Lack was behind the launch of online-only site Mississippi Todaythree years ago. But only now is he discussing his involvement.

Lack was interviewed for the first time about Mississippi Todayby AP’s David Bauder.

Though born and raised in Manhattan, Lack’s mother is from Mississippi; his great-grandfather was mayor of Greenville.

Inspired by the Texas Tribune’s success as a “nonprofit, digital-first” publisher, as many local newspapers nationwide are forced to shutter or shrink dramatically, Lack invested $1 million in the local news initiative Mississippi Today.

The publication is based in Jackson, Mississippi. Previously, only a handful of reporters covered local government. The state has 19 daily newspapers.

“You’re beginning to see an understanding that local news is a public responsibility central to a working democracy, and it’s core to the good health and life of every community,” Lack told AP.

“We just want to provide something that is unique and special, a little deeper and with a little more texture than other media that is just breaking news,” Nave told AP.

The site also licenses its content to other news organizations.

Lack’s role seems primarily advisory. He supplies Nave with some ideas. Given his position in the media world, he is able to give Nave and the Mississippi Today staff access to influential players in the industry.

Looking ahead, Mississippi Today is interested in sponsoring and hosting events to enhance community relations and bring more local attention to the site.