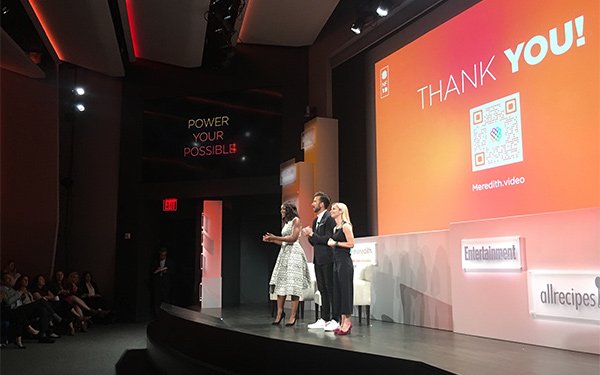 Meredith Corporation announced a new slate of programming dedicated to celebrating women, as well as doubling down on content the publisher says its audience craves: red carpet, royals and reality TV.

This year, Meredith split up its NewFront into two identical presentations with different time slots. Attendees had easy access to a People red carpet area open for posing with an Emmy Award, a leafy wall of mimosas and Better Homes & Gardens branding and a selfie mirror from InStyle.

While other publishers' NewFront presentations chose to focus on the media company as a whole, Meredith gave ample time to its specific brands with successful video content, such as People and InStyle. (Meredith owns 42 brands, in food, lifestyle and entertainment categories.)

The brand will triple red-carpet coverage and launch a new weekly show dedicated to news about the British royal family.

It will also create a new series about reality TV shows, called “Reality Check,” hosted by Lyndsey Rodrigues. It launches May 13 on PeopleTV, the streaming ad-supported network.

Andrew Snyder, senior vice president of video, told Publishers the company is focusing on video content that has a specific focus, because audiences "follow topics and brands they care about."

In addition to the three Rs, Meredith Corp. is expanding programming to celebrate more women, including Latinas and parents. The company claims it reaches 80% of U.S. millennial women.

While the presentation underscores the company's commitment to distributing video on YouTube and OTT channels, IGTV is a big focus for Meredith Corp. in 2019.

The publisher will have 20 new shows in vertical video for IGTV, with 15 already live. Meredith’s audience opens Instagram 30 times a day on average, according to the company. IGTV has generated 20 million views in the past three months.

IGTV is also a smart way for the publisher to reach a younger audience.

Meredith announced a new partnership with #SeeHer, an initiative from the Association of National Advertisers that aims to increase the accurate representation of girls and women in media. Seven of Meredith’s brands will produce #SeeHer content.

Journalist Katie Couric is teaming with People and #SeeHer on a new weekly, digital series called “#SeeHer Story,” which will spotlight women that have had an important impact on society. “You know what they say: if you can see her, you can be her,” Couric said in a pre-recorded video addressing the NewFront audience.

During the presentation, Meredith said a recent CPG campaign demonstrated a 3.3% sales lift, and revealed 53% of sales were from people who hadn't purchased the product in the past year.

"We use reach and scale to connect with consumers to drive action and make purchases," Newman said.

Newman also touted the ability to "slice and dice inventory" at Meredith, where advertisers can buy demos or audiences, or choose to integrate with specific brands.