Why Martech Is Overtaking Ad Tech 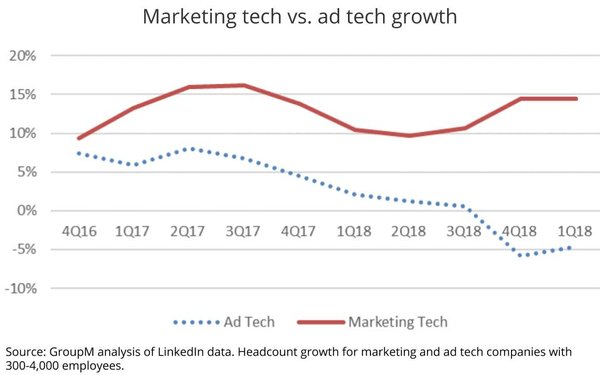 Using employee head counts as a barometer of industry growth, ad tech has hit the wall and has even begun to erode in the most recent quarters. That’s the bad news for Madison Avenue’s technology-obsessed culture.

The good news, according to a new analysis from GroupM’s Brian Wieser, is that marketing tech is more than picking up the slack, expanding at double-digit rates.

The gap in the industry’s technology growth trajectories indicates some underlying shifts in where marketers are placing their bets.

The shift in focus doesn’t necessarily mean ad tech is becoming less important, as much as it “reflects the relative maturity and commoditization of at tech” and a corresponding growth in “marketer sophistication,” Wieser explains, as well as some external factors such as heightened concern over using the kind of “third-party” data that ad tech typically relies on vs. first-party data that consumers opt into as part of CRM and loyalty programs with marketers.

Over time, Wieser projects the trend will be to “converge” martech and ad tech functions, noting: “Ideally, this will make it easier to shift resources between different marketing activities more efficiently as well. To the extent that ad-tech concepts and processes are applied across all media, with time this integration should then help to improve the efficiency of marketing more generally.”

1 comment about "Why Martech Is Overtaking Ad Tech".
Check to receive email when comments are posted.
Next story loading