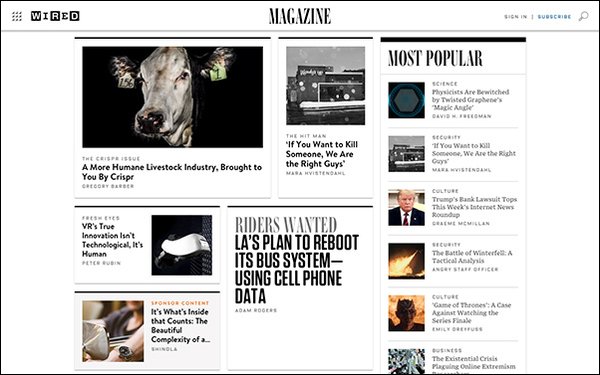 Wired editor-in-chief Nicholas Thompson reflected on the year since the Condé Nast site launched a metered paywall and what the brand has learned, in a post published on the Wired website.

Readers can access four free stories a month on the Wired site before they are asked to subscribe. Subscribers do not get served ads online.

Thompson said Wired invested in three new kinds of editorial when they launched the subscription: long-form reporting, Ideas essays (an op-ed section) and guides on different tech issues and products.

Thompson listed "the 11 pieces that drove the most subscriptions this past year.”

Two of the 11 were “essentially buying guides” — covering after-Christmas and Cyber Monday sales in 2018. The other stories ranged from big features to stories that “didn’t get that much readership,” but somehow still pushed readers to subscribe.

For example, a story on “The Genius Neuroscientist Who Might Hold the Key to True AI.”

Thompson noted people are likely to pay for a subscription "if you send them newsletters."

“The propensity to subscribe by people who enter Wired.com on a mobile device is rather low — unless they come in via a newsletter,” he wrote. “A visitor who reaches us via search is 1/19th as likely to subscribe as one who comes in from a newsletter.”

This is one of the reasons Wired is launching “all kinds of new newsletters, tied to specific sections of the site."

The greatest growth was on the Apple News platform. Wired is also a Apple News Plus partner, which allows readers to subscribe to a bundle of a number of publications for one monthly fee.

However, direct subscribers to Wired get more content than the ones from Apple News Plus, such as access to its archives, an app and the magazine.

Adding Amazon Pay as an option also “seemed to help a lot” with getting readers to subscribe, Thompson noted. As did wording: “When we asked people to ‘place order’ instead of ‘start my subscription,’ 9% more did so.”

Having a paywall means Wired’s “economic success depends on publishing stuff your readers love — not just stuff they click.” It promises editorial  “no one would be asked to create clickbait crap of the kind all digital reporters dread.”

Thompson called the digital advertising business “unruly, unpredictable, and slowly being swallowed by the social-media platforms.”

Wired also experimented with some features that did not work as well as expected, such as offering subscribers free stuff. That meant a device to cover their laptop camera or a short-term subscription to a partner brand.